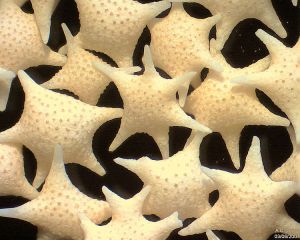 In the last of my interviews with Spanish scientists, Fernando Caballero Santamaria describes his work in palaeontology at the University of the Basque Country, and his experiences in discussing science-faith questions with his colleagues.

I work with microfossils – remnants of a type of marine plankton called foraminifera. In some kinds of rock you can find thousands of these tiny fossils in every cubic centimetre, and they’re a great way to study geological change.

As a PhD student I looked at the great extinction at the end of the cretaceous and beginning of the tertiary period (the K-T boundary) that correlates with volcanic and meteorite activity. During that particular extinction most plankton disappeared, and then completely new species began to appear – very small ones at first – that re-colonised all the different ecological niches. My research group has now helped to establish three other geological boundaries (Global Stratotypes and Section Points) as a reference for researchers around the world. Just two weeks ago we had an event where we put a ‘golden spike’ in an important rock stratotype in the Basque country.

I became a Christian when I was fourteen, and when I went to university I got involved in the Spanish Christian student movement, GBU. The support that I received from that group was very important. There were several of us in the same situation: just beginning our studies and asking questions about the relationship between science and faith. Through our discussions we were able to grow together, and some of us still meet whenever when we can.

I enjoy my work in palaeontology immensely. I initially studied to be a science teacher, and then spent fifteen years working as a travelling secretary for GBU. During my time with GBU I continued my studies in palaeontology and completed a PhD. When I finished working for GBU, I was invited to continue my research in the geology department. I am happy with the course that my career has taken. Working for GBU and the university at the same time allowed my faith and my science to grow in parallel. My work with GBU has also given me a heart for young people, and particularly teenagers. I try to help them relate what they hear at church on Sunday with what they hear at school on Monday. They have a lot of questions, but I hope that they can learn to reconcile the two in their minds, as I have.

I have never hidden my faith from my colleagues, and we’ve had some interesting conversations. Some of them are serious atheists who have written on the conflict between science and faith, but because we all take our work in palaeontology seriously and have spent a lot of time together, both as colleagues and as friends, we can speak freely about these things. When they ask me ‘Why? How can you believe?’, I try to explain the difference between how science speaks, and how the Bible speaks.

There are other people who have tried to create bridges in a way that I really appreciate. I remember one field trip that I went on in the United States with a senior professor from the University of Madrid. We were looking for fossils at the Palaeocene – Eocene boundary. One day as we sat talking she asked me about my faith, because she had heard that I was a Christian. To my surprise (because I knew that she did not share my beliefs) she said that one of the books beside her bed was ‘La Biblia en España’, a biography about distributing the Bible in Spain and the translation of part of the Bible by George Barrow into Basque. It was wonderful to have that link  – I never expected to have that sort of conversation with her, and since then we have worked and published together.