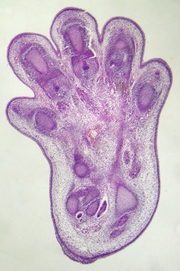 This week at the Faraday Institute I went to a seminar by the Scottish Pathologist and Professor at Cambridge University, Andrew Wyllie (the recording is here). This guy is a legend – not many scientists can say that they have over 25,000 citations. He was one of the main people who discovered the process of ‘programmed cell death’ (apoptosis).

Apoptosis happens during the normal development of any organism, and is also essential for survival during adulthood – if it’s disrupted in any way it can cause cancer. I worked on apoptosis during my research masters course at Edinburgh, and first met Professor Wylie at a dinner-discussion in Cambridge when I had just begun working for Christians in Science. In his talk this week Wyllie described his work on apoptosis and then linked it to his faith in quite a surprising way.

It took a while for the research community to accept the idea of programmed cell death, but it has now been recognised as a vital aspect of cell biology and become the subject of many other people’s research (as you can tell by the 25,000 times his paper has been mentioned in the scientific literature).

After describing the discovery of apoptosis Wyllie explained how his Christian faith helped him to recognise and accept the evidence that that death was part of life for us. The Genesis account of the inherent corruption of humans led God to – in a way – protect us from ourselves by giving us finite lives. And for a Christian death is not the end of the story. This idea of death as a type of preservative for human society is similar to the story that Wylie found in cell biology.

Wylie thinks one of the reasons why the scientific establishment took a while to accept apoptosis was the fear of death that’s inherent in modern society. And he thinks that it took someone who wasn’t afraid of death to bring the phenomenon of programmed cell death to light. That’s an interesting perspective on the development of scientific ideas to say the least.