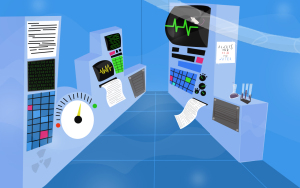 Do scientists and ‘creatives’ have more in common than they think? I recently interviewed Dr Ruth Hogg, a vision scientist at Queen’s University, Belfast (part 1 here). During our conversation I compared the scientific lifestyle with more overtly creative artistic professions, and Ruth said there was ‘probably a closer relationship [between the two] than the general public would realise’. The freedoms and constraints, and the hectic schedule with intense periods of creativity, development and travelling sound very similar to the lifestyle of many artists.

Once you’re leading a lab, a significant part of your time is spent trying to think up new ideas for grant proposals. You’ve got to know where the field is going and how you can contribute to it. You have to be quite innovative to find ways to fund your research interests in the context of available funding streams, and that can be a good thing because it makes you broaden your horizons and think a bit more widely. Teaching students and trying to get the best out of them requires a kind of creativity as well. It’s also quite a chaotic life: it’s not a nine to five job and involves a massive amount of variety. It’s a very challenging job but there’s a level of freedom over your time and the content of your work, even for PhD students, that isn’t available in a lot of careers. For Ruth, that is one of the real advantages of science.

My last question to Ruth was about how her creativity related to her faith. She was very comfortable with being creative in science, but hadn’t thought about it so much in relation to her faith. For those from a fairly conservative Protestant background there can be an initial fear of the concept of applying creativity to their faith because it might be about ‘making things up’, and end up in making theological mistakes. The reality is that there is already huge creativity in the church, particularly in worship music and other art forms. How can a scientist like Ruth express this creativity? Learning to articulate the interaction between faith and science is certainly a creative process. For someone with a deeply enquiring mind, this is a constant learning process, and Ruth’s understanding of her faith is constantly being recalibrated as she experiences new situations and sees how other people live out their beliefs. Is this something that other scientists identify with?