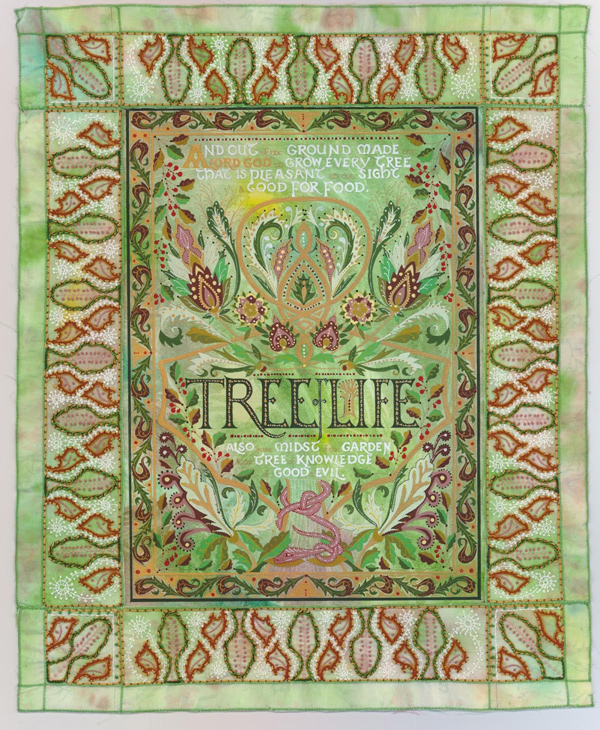 In 2009, Sue Symons finished 7,000 hours of work on a series of illuminated and embroidered texts which celebrate the theme of creation. I was fortunate enough to catch sight of the original work at the Christian Resources Exhibition in May this year, and in the end I had to buy the book. I was supposed to be working on the Faraday Institute stand at the time, but the level of detail in the pictures made me want to pore over them. Each of the 42 panels brings part of the creation story to life with a beautifully drawn and coloured central piece and a sewn border. The work is painstakingly intricate, with plants and animals covering every available inch. The closer I look, even at the pieces that initially seem to be an abstract pattern, the more living detail I see. 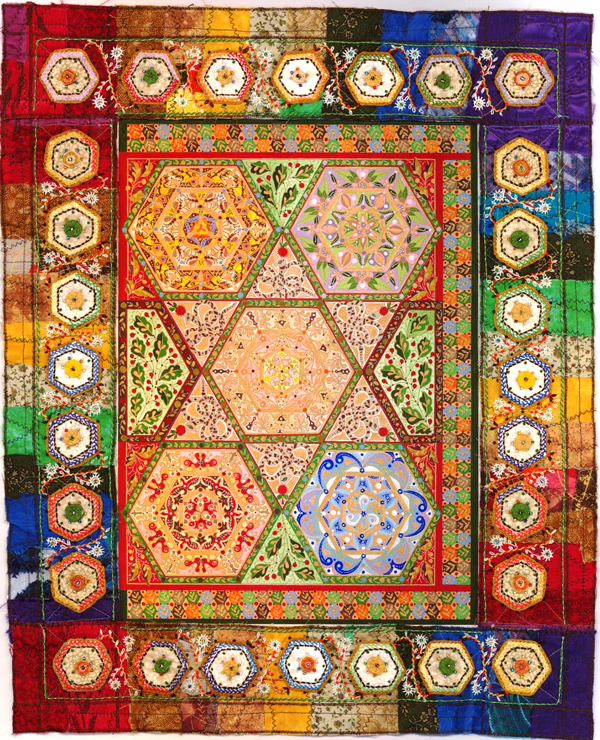 I was initially very sceptical about the choice of the King James Version for this piece, but the more lyrical and slightly archaic language really does work as part of the illustrated whole. Everything is celebrated in turn, as the seemingly limitless variety and splendour of life on earth unfolds before my eyes. In a sense, the artist is riffing on the theme of creation, and that becomes more apparent as the book goes on. The whole text is repeated later on, wrapped around in a spiral among the foliage. The final page pans out to show the whole earth, suspended in space and pregnant with life. Several billion years is nothing to a God who creates on this scale.

In a sense, the text of the Genesis 1 creation story makes so much more sense in this context. The words may seem simple but they are steeped in meaning, and the creation they speak of is similarly complex and interwoven. There is an order to the story, just as there is order in the living world. The story is also personal, as God breathes life into everything, establishing humankind as his vice-regents over it all. We are to explore, benefit from, and take care of it everything. There is joy and delight in every detail and purpose of things.

Each page has its own theme and style within the overall style of the book, which in my mind reflects the different habitats on earth. Everything is being itself, doing its bit as part of its own ecosystem. All of creation is involved in God’s purposes and unfolding plans for creation. There is also creativity within creation itself as living things develop and evolve: diversity of form and colour, shape and pattern, behaviour and language. Everything is good, everything is provided for, and it everything has its own intrinsic value. Sue’s work demonstrates how creation is to be enjoyed for its own sake, revelling in every detail that shows itself to us. 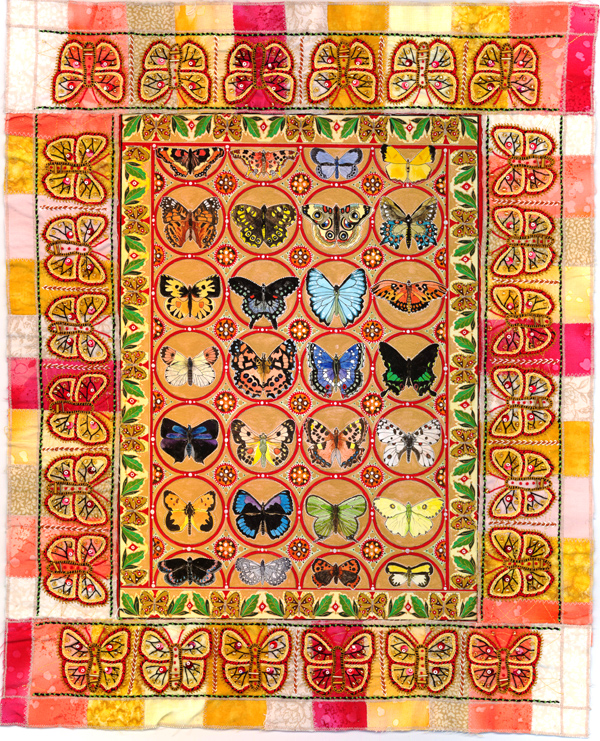 There is an opportunity to host an exhibition of Creation: A Celebration in a public building in your local area. If you would like to do this, contact Bible Society for details.

Sue studied fine arts at Bath Academy of Art, followed by a teacher-training course where she specialised in needlework. She taught at schools in Wallingford and Malvern before moving to France for four years with her first husband and small child. She then spent sixteen years in British Columbia, Canada, where she taught further education classes and exhibited widely. In 2005 she returned to England, and now lives in Somerset, where she began work on her first book, One Man’s Journey to Heaven. The original artwork, now known as the Bath Abbey Diptychs, relates the life of Christ from Annunciation to Ascension.