Cooperative Slime: A sociable amoeba that sheds light on altruism? 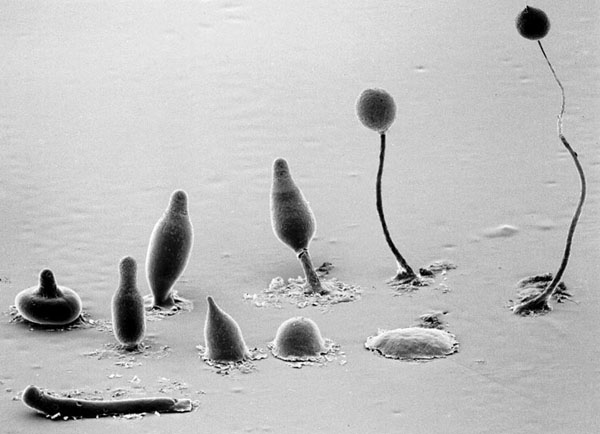 The first time I saw a video of a slime mould I was completely captivated. Dictyostelium discoidium is not slimy or a mould, but an amoeba with an amazing ability. When food is plentiful they reproduce simply by splitting in two. When food is scarce, thousands of Dictyostelium gather together to form a sort of slug, which moves around until it finds a suitable spot in which to send up a fruiting body. Spores from the fruiting body are now in a good position to be picked up and carried away when animals brush by, hopefully carrying them to areas with more food.

The strange activities of Dictyostelium have been known for a long time, but somehow I had managed to study biology for four years without coming across it. I was amazed because this group of single-celled organisms came together to do something that would have been impossible to predict if you had seen the separate amoebae going about their business. Other microbes have single and multicellular forms, but this type of life-cycle switch was more complex than anything I had seen before.

A group of scientists have used Dictyostelium to understand cooperative behaviour, and how it is regulated. The big risk of cooperation is cheating, as you will see if you watch children playing together for any length of time. Cheaters spoil the game, so new techniques are employed to stop cheating and allow the game to survive. In the long run, will habitual cheaters thrive or fail? The result is not always clear.

The problem for Dictyostelium is that the cells which form the stalk of the fruiting body, which is about 20% of the group, die in order to allow the other 80% to climb up and over them to form the fruiting body and escape as spores. In genetically identical collections of cells that sacrifice benefits everyone’s genes, but when two unrelated populations of amoebae come together and cooperate to make a fruiting body, the dynamics change and some cheating goes on.

First of all, the ‘slug’ moves a little slower because cells compete to be at the back of the line and avoid forming the stalk. When the stalk forms, one of the competing populations might be underrepresented in the stalk, and overrepresented in the spores. Perhaps this is why Dictyostelium hasn’t evolved to become a fully-fledged multicellular animal yet – its different cell populations aren’t cooperating fully.

Interestingly the scientists who are studying this problem, Joan Strassmann and David Queller, have collaborated to the extent that they run a joint lab. Like the amoebae they now study, both scientists moved from more solitary field studies on social insects, and chose to join the community of Dictyostelium researchers. These organisms offer the advantage of being amenable to laboratory studies, including genetic analysis.

Strassmann and Queller have found that it is possible for the better-fed cells to force the weaker ones to form the stalk using a chemical cue. Some individuals are genetically less susceptible to this chemical cue and thus form the ‘cheaters’. So what stops the ‘cheating mutation’ from ruining the cooperative system? The gene for sensitivity to the chemical cue also has other functions within the organism, and without these additional abilities the organism is at a disadvantage. So piggy-backing a response to cooperative cues onto a gene which has other essential functions is a way of controlling the spread of cheating. Fieldwork has shown that natural fruiting bodies often form aggregations with related individuals in order to bypass these issues from the start 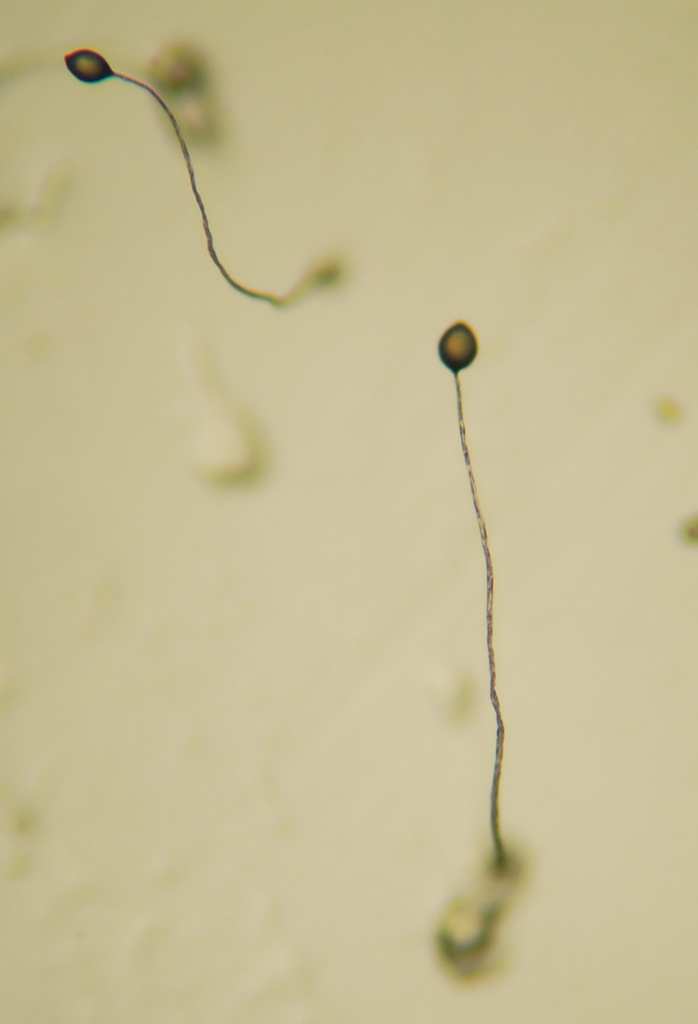 I’m not completely convinced that this is an example of altruism, because the organisms are so simple and the behaviour so tightly controlled that it’s not clear whether ‘sacrifice’ is actually happening. Of course, the work is fascinating and important in understanding cooperation. It will be interesting to see how this research helps us to understand the development of whole organisms.

It’s humbling to see such highly coordinated behaviour in a minute organism like Dictyostelium, when more complex creatures like ourselves can find the simplest of cooperative tasks almost impossible at times. Somehow a high degree of cooperation is required for multicellular organisms to develop in the first place, but after they develop a nervous system and brain, cooperation between organisms can become much more difficult. There are obviously different layers and types of cooperation in the living world, and this research is just the tip of the iceberg in understanding them.

Category: Biology, Cooperation, The Snuggle For Existence, Wonder, Wonders Of The Living World