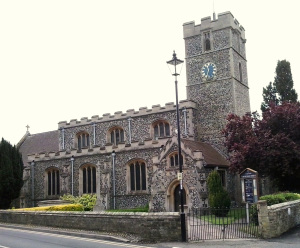 We have held a science-themed session for the children in my church a couple of times, but what about something for everyone? A church leader in Cambridgeshire recently contacted me because he was about to run a science and faith weekend in his parish, and I thought it was such a great idea that I wanted to spread the word.

Trevor Thorn, a fundraising professional and lay minister for two country churches, has always had a passion for both science and creativity. When he suggested a science-themed weekend at All Saints’ Landbeach and St John’s Waterbeach, he received such an overwhelmingly positive response that he decided to give it a go. The person in charge of the childrens’ work happened to be a mathematician who shared his interest in science, and another member of the congregation was also a lab technician. Together they planned a series of activities that would show how science can complement faith in a very positive way.

The weekend was called ‘Celebrating the Wonders of Creation Revealed by Science’, and began with an afternoon of experiments and science demonstrations for children. About 150 children and parents flocked into St John’s church and enjoyed lighting light bulbs, walking on water, making rockets, and so on, finishing off the day with tea and cake (edible, not experimental). To show how the pro’s do it, two scientists from the congregation demonstrated practical aspects of their own work in marine biology and nanotechnology.

On Sunday there were science-themed services: one aimed at adults and one for all ages. Two speakers, neuroscientist Revd Dr Alasdair Coles and astronomer Frank Flynn, provided some reflections on how they see God in their own field of science. Looking through the order of service, including a hymn written by Trevor himself and readings from Psalm 139 and Colossians 1, it is striking to see how beautiful a service like this can be.

The reaction to the weekend was extremely positive. What surprised Trevor was the number of dads – many of whom are not usually interested in church activities – who brought their kids along for the activity afternoon. After the service for adults, most of the congregation stayed behind for a discussion time with the speakers. This is clearly a topic that excites people.

Running a weekend like this for the whole community could be a great way to use the talents of the scientists who are members of your local congregations, and as Trevor pointed out, there are now a number of resources online to help.

“What a great weekend of fun, science and faith! An extraordinary series of events put on by an ordinary rural Anglican parish. Congratulations. If they can do it, so can any church anywhere.”

“Full marks for the initiative of two small country churches parallel to the Cambridge Science week… The activities generated a great deal of interest and stimulated thinking in what can sometimes be a rather ‘taboo’ subject in Christian circles. An excellent and courageous contribution from a small village community.”

The experiments and order of service from this weekend can be downloaded from here.

Another liturgy and all-age service outline with activities can be found here.