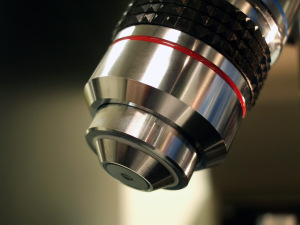 In his Faraday seminar on teleology (part 1 here), Dr Harvey McMahon suggested that we use more than one type of language to talk about biology. If language is a lens that gives us a certain perspective, then it would be useful to have more than one type of lens in our toolbox. The lens that McMahon suggested we use a little more is teleology, or purpose. He gave three examples of how teleological thinking can be applied.

The stochastic nature of biology

‘Stochastic’ behaviour involves a certain amount of randomness. You could predict the outcome of a stochastic event using statistics, but you would never be 100% certain what was going to happen. That is the nature of most biological processes. The question is, if we were smart enough to study biological systems down to the atomic level, would we find that they are actually completely predictable? Would knowing all the variables make 100% predictions possible? And if we could predict every process in our bodies and brains, would there be room for human decisions?

McMahon’s study of proteins has convinced him that there is true randomness in biology. For example, it’s very popular at the moment to make a pure solution of a protein and study its structure using X-ray crystallography. Crystal structures of proteins are useful, but they reveal only one possible conformation of a protein. McMahon works with membrane-bound proteins some of which have regions that move a lot, and may have to be stabilised in some way in order to function correctly. Randomness is inherent in the structure and function of these proteins, and in many other biological processes. Of course the question of free will is more complex than this, but it’s a start.

Proteins are often described as if they are robots in an assembly line, each doing their bit to transform substrate A into substrate B in a linear series of biochemical reactions. More detailed analysis shows that they actually work in highly complex multi-dimensional networks, and there may be multiple ways to get from A to B, with many side reactions. What McMahon has realised through his own work is that for some networks, the energy input is towards the end, when the substrate has almost finished being transformed into B. This allows for an amazing amount of flexibility in the system, but every time the same end point is reached. The process is not being pushed, but pulled. Is this by design? A naturalistic explanation is entirely possible, but it looks as if the network of proteins is committed to a certain course. Purpose, or teleology, seems to be encoded in the system.

Perhaps biological teleology and theology can inform each other. Theology says that the truth about God was revealed to humankind bit by bit, so can this theological understanding help us to understand the evolution of humankind? And if ‘The heavens declare the glory of God’, should we be learning about God from his creation?

McMahon suggested that the principles of a biological system could apply to much of life on a larger scale. For example, feedback loops and other reactions inside the cell ensure that things stay in balance (homeostasis) in our bodies. It takes a lot of energy to keep things in balance, but doing so makes it possible to up- and down- regulate the system very quickly. The ‘retinal bipolar neurons’ that are involved in our light sensory perception are a great example of this, where there is a constant turnover of their signalling machinery making it incredibly sensitive to inputs from light sensitive cells. We might view this constant turnover as a waste of energy but for our bodies, waste is part of the system and allows for efficiency. Can we learn from this? Perhaps efficiency should not be the primary goal in human institutions, and a bit of waste would allow for more effective working? Another example of something we can learn from biology is the way in which cells are master integrators of information because they exist in close relational proximity to each other. Should we do the same?

Our understanding of science affects every aspect of our lives. McMahon’s seminar was an appeal for integrated holistic thinking. This type of thinking was applied historically, but has since been questioned by those who did not understand what it might have to offer. It’s time to change the lens.