Chance or Necessity in the Origin of Life? 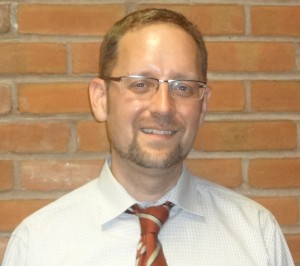 Was the living world destined to look the way we find it? Or to ask a question that’s closer to home, were our bodies meant to be the way they are? These are the sorts of questions that astrobiologist Stephen Freeland asks as part of his research into the genetic code. In this podcast (transcript below), Ruth Bancewicz interviews Stephen, asking how he became interested in this area, why he believes it is important, and where it might lead in the future.

What do you do?

I use computers to try to understand life’s fundamental biochemistry so that we understand how and why life turned out the way it did.

So you don’t actually go and dig in a muddy puddle?

I don’t, and one of the first things I learned about myself as a researcher is that I am absolutely no good at the empirical research. I was very happy to discover theoretical research.

Why is this field interesting to you?

It snuck up on me. As an undergraduate I really thought that I would be chasing down fossils and living in a museum. I had that sort of Indiana Jones view of what I wanted to do, and that really was the first thing I discovered after graduation – a job living on a desert island. I realised I wanted home comforts and I wasn’t enjoying all of what was there. So I trained as a computer scientist, which involved resurrecting a little bit of computing I had done as a teenager. I did that to get into a PhD, and my supervisor – who was a very smart man – gave me a little problem to work on to do with the genetic code. Slowly that turned into my PhD and then my entire career. It was discovering ways to use a computer to ask questions that otherwise might not be answerable.

Presumably you view this work as important to other people as well?

I hope it doesn’t sound fake humble if I say that I am consistently surprised to find anybody’s reading this stuff. I think that maybe all scientists go through this but I can go through months, if not years, of thinking ‘Why do I write these papers? And then you turn a page in a textbook and find that somebody’s using one of your figures. So, it’s a nice morale boost every time I realise other people are paying attention.

What are the implications of what you’re trying to find out? What kinds of questions is it raising?

I think the deepest question is ‘chance vs necessity’ in the origin of life. Not so much whether life was bound to occur (although I do find that a very interesting question) but more the question, ‘given that life started, was it destined to look the way we find it?’ There’s one school of thought, which is perhaps the orthodoxy in evolutionary biology, that would claim the scientific answer is ‘no’. It’s the classic butterfly effect. If you could magically go back in time and bend one blade of grass or if you could go back far enough and change one molecule of the pre-biotic soup, everything would turn out unimaginably different in ways that we would struggle to understand.

There is another school of thought, much smaller and much more recent, that is challenging that; or at the very least challenging whether there is scientific basis to know one way or the other. I think at its deepest level what I am doing is asking, ‘can I contribute to that question?’ From a scientific perspective that is particularly interesting as the clues continue to come in that we may well be living in a galaxy teeming with life. The next big question is ‘OK, what kind of life?’ Of course, quite apart from that, there are more philosophical or spiritual dimensions to saying ‘are we the way that we were destined to be in a physical way?’

Those are very big questions!

And I can, at best, contribute something very small to them.

Does your work have any theological implications?

Well there are, and I think one of the things I am slowly learning is to realise that I’m not a theologian. I you really want a theological explanation I think the most productive way forward is to create spaces where I get to sit down with a theologian, tell them what my science is and ask them ‘what is the theology in that?’

I guess as I take over this role of Director of Interdisciplinary Science at UMBC, one of the things we notice is that often the least successful interdisciplinarians are the individuals who seek to constantly encompass new areas. And the most successful are the ones who have the humility to find the people who already represent that area and learn how to sit and talk with them. That’s often the good stuff.

So that’s a bit of a disclaimer. Do I see spiritual significance in what I do? Of course. Do I claim to understand or be able to present a good theological basis for it? No, if that makes sense as a distinction.

How do your colleagues react when you ask these kinds of questions about origins of life?

That’s a really good question because it so much depends on which colleagues. I would self-declare these days as an astrobiologist. If you go an astrobiology conference I’m just ‘one of the guys’ giving the talk, and people find it interesting.

If I give a talk in the biology department here I think at first there was scepticism. As they listened and recognised all the basic elements of standard science (perhaps just asking a question further back and further out than ones they were asking) they were very appreciative of it, and so I think that that has made me very appreciative of them. But that tends to be the reaction when I’m talking to traditional scientists – the initial scepticism but if they listened they come away convinced. ‘OK this is good, legitimate science, I just never thought about things like that before.’

And then of course, if you turn to ask the general public or the students, you can be anywhere in between. I think generally there is enormous excitement. I’d say the most touching reaction you get is when you talk to students, maybe give a class on astrobiology or the origin of life, and they will tell you that they didn’t realise science could be interesting. What are we doing to them that they didn’t know science could be interesting?

I am finding it fascinating, the mosaic that is coming into focus now from different disciplines that seek to understand life and its place within a larger non-living universe. I think in part it’s the sheer joy of discovering fundamental new disciplines, and their findings and their ways of thinking, what they know. There’s just a joy there that takes me back almost to childhood when everything you’re learning is fresh and some of it is very exciting.