The development of the Big Bang theory is an example of how faith responses can contribute to the scientific discussion in a positive way. Rodney Holder, an Anglican priest and former cosmologist, has contributed to this conversation for a number of years. He has just published a new book, ‘Big Bang Big God: A Universe designed for life?’ that aims to bring the debate to a wider audience.

Until the 1920’s, the scientific consensus was that the universe is a static entity: it has always been there, and it always will. Einstein’s general theory of relativity linked matter, time and space and Einstein came up with a solution which gave a static, eternal universe. In 1927 the Catholic priest and physicist Georges Lemaitre came up with another solution, in which the universe was expanding.

A couple of years after Lemaitre came up with his new model, Edwin Hubble discovered astronomical evidence for an expanding universe – the famous redshift. Then in 1931 Lemaître came up with a further solution in which the universe expanded from a highly compact initial state which he called the ‘primeval atom’. Some scientists objected to Lemaitre’s proposal. Einstein thought it was ‘abominable’, and the Cambridge Professor of Astronomy Fred Hoyle derisively called it the ‘Big Bang theory’, a name that stuck. Part of their objection was ideological. If the Universe had a beginning, their enemies the creationists would never let anyone hear the end of it!

Christians, all of whom are technically creationists because they believe in a creator, responded in a number of ways. Some preferred, like Hoyle, to hold onto a version of the steady state theory. If the universe always has and always will be expanding, then there would have to be the creation of new matter in the spaces between the galaxies. So they reasoned that would be evidence for an infinitely providential God. If, on the other hand, the Big Bang theory was correct, then God must have started it all off, just as it says in Genesis.

So there were Christians on either side of the debate, including eminent scientists who contributed to scientific as well as theological discussions. The fact that many took the Big Bang seriously meant that the conversation moved beyond Hoyle’s belligerent rejection. Some tried to stay out of it altogether. The physicist Arthur Eddington, a Quaker, believed that religion and science should be kept apart so he found the whole idea of a beginning to the Universe ‘repugnant’. Lemaitre wasn’t so worried, but he did try to prevent the Pope declaring that the Big Bang was evidence for creation.

Since the discovery in the 1960s of the remains of the heat from the Big Bang – the cosmic microwave background – the theory has not been disputed. The faith discussion has gradually become more nuanced, with fewer Christians looking for scientific evidence for the Bible, and most reading it as a non-scientific text. The Big Bang is still seen by some as evidence for God, but many are suspicious of this easy answer. Science is always changing, and to pin one’s faith to a theory is not too wise. 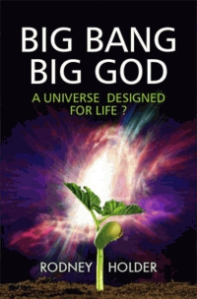 Rodney’s book is a very clear description of the story of the Big Bang, using pictures to explain the most difficult ideas. He explores arguments for the existence of God both from a beginning and from the fine-tuning, the possibility of multiple Universes, and the theological implications of those ideas. If you’re looking for an introduction to these topics, this book would be a good place to start. (£6.00 from the Faraday shop).