Beyond Matter: Why Science Needs Metaphysics

What did you do on your leap day this year? I listened to a talk by Roger Trigg, who is Emeritus Professor of Philosophy at the University of Warwick and a Senior Research Fellow of the Ian Ramsey Centre for Science and Religion in Oxford. Professor Trigg has recently written a book, Beyond Matter: Why Science Needs Metaphysics, and on the 29th February he came to the Faraday Institute to tell us about it. 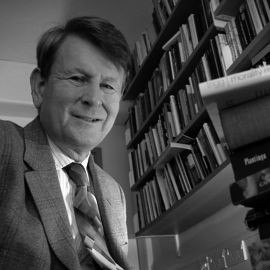 Science works, and we have non-stick frying pans to prove it. But as a philosopher, Trigg cannot simply stop there. He has to ask, “What has to be working in order for science to work?” Other philosophers have argued that science doesn’t need to be justified, or that science is just a matter of taste and not everyone has to accept what it says. For Trigg, however, science is not relative and it does needs to be explained. A large part of his new book explains this thinking. It is better to admit that science needs metaphysics or first principles, and talk rationally about what those principles are.

Trigg believes that both science and religion are claims about truth. They are different ways of looking at or investigating a single reality. That reality exists beyond ourselves and our own thoughts about it. It is something solid that tests our ideas. Science reflects something of reality, and thankfully our minds can grasp it – that is the assumption that lies behind all of science. Scientists are never satisfied with their understanding of reality, and they are always trying to improve their knowledge by doing more experiments. If reality were not intelligible, or if it were not a thing at all, science would be impossible.

When asked about his own beliefs, Trigg pointed to the Cambridge Platonists who believed that “reason is the candle of the Lord”. We can understand reality, he said, because we are creatures of the Creator. In other words, we share something of the reason that created the universe.

You can purchase the book from https://www.templetonpress.org/book/beyond-matter

Or listen to a podcast about it here https://soundcloud.com/university-of-cambridge/roger-trigg-beyond-matter