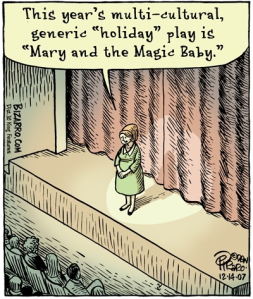 I watched the film The Nativity Story a few weeks ago. I picked it up at a well-known supermarket for just £3 so I was a bit dubious about what it would be like, but I was pleasantly surprised. The production values are great and the story is told well. Of course a lot of detail was added to the gospel accounts but the extra content was – as far as I can judge – pretty much in keeping with what we know of the period historically, and the original message was faithfully preserved. I thought the film makers did well in creating the atmosphere of an occupied country, showing Mary and Joseph’s developing relationship and, though everyone knows the story (?),  introducing some suspense. I objected to the very cheesy birth tableau, but perhaps that was to be expected…

There is a definite science and faith link in the story of the birth of Jesus. Colin Humphreys is Professor of Materials Science at Cambridge University, and is one of the people who has helped to date the birth of Jesus more accurately in recent years. I’ve heard him tell the story of how he saw in his daughter’s ‘Great Men of History’ book that the dates of Jesus’ birth and death were not known very accurately. Being a Christian, he thought it was important to know a bit more about such momentous happenings as the nativity and crucifixion of Christ.  He got together with an astrophysicist from Oxford University, WG Waddington, to work out the most likely dates of both events. The Nature paper that he and Waddington then wrote on the date of the crucifixion is a somewhat unusual publication for someone whose stock-in-trade is electron microscopy.

There’s a good summary of Humphrey and Waddington’s work on the date of the birth of Christ in the journal Science and Christian Belief.  There are debates about what the ‘star of Bethlehem‘ might be, so it’s harder to pin down the date of Jesus’ birth. But Humphreys says that ‘The evidence points to Jesus being born in the period 9 March-4 May, 5 BC, probably around Passover time: 13-27 April, 5 BC’. Happy Easter?

And finally, a Christmas cracker joke to finish the year off in style. Q: Why did the Rooster crow before daybreak? A: His cluck was too fast.