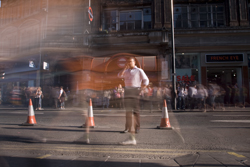 Photo from Test of FAITH, © The Faraday Institute

I’ve been reading Alister McGrath’s book ‘Surprised by Meaning’, and I love the picture of the scientific enterprise created by the section entitled ‘The Best Explanation’ (chapter 6, page 26-17).

McGrath begins by explaining that the same data may give rise to multiple competing theories about the way things are. The challenge is to come up with the explanation that makes the most sense in the light of the data. The best explanation may not make sense of every piece of data or be completely confirmed by the evidence available, but it will make as much sense of as much of the data as possible when compared to other theories.

we have to ask how successful a theory is at making sense of the world, while we look over our shoulder at its rivals.

Towards the end of the section he questions the popular assumption that scientists huddle together until they find the most logical explanation for a phenomenon.

the ‘best’ explanation may not be the most reasonable or commonsense explanation. Scientists don’t lay down in advance what is reasonable. Time and time again, they have found the natural world to contradict what common sense might have expected or predicted. Science would fail if it were forced to conform to human ideas of rationality.

McGrath quotes quantum theory as evidence of the sometimes surprising nature of scientific discoveries. He goes on to say that

The instinctive question for the scientist to ask is not ‘is it reasonable?’ as if one knew beforehand the shape that rationality had to take, but ‘What makes you think that might be the case?’ Science is about warranted belief, not about rational belief. The history of science is about the recalibration of notions of ‘rationality’ in the light of what was actually discovered about the deeper structure of nature.

I find this testing of our assumptions appealing because it makes the world and our exploration of it so much more interesting. It takes all sorts to build a good lab, because you need the variety of perspectives that different personalities bring to the table. With a well-rounded research group you can examine the data in a number of ways, explore a variety of different avenues, and come up with great results. (Well that’s the theory anyway!)

In general I’m resistant to inferring the character of God from nature, but I will make an exception here. I do believe that the nature of the created order, in that it repeatedly challenges our assumptions, reflects something of God. We have to go beyond our gut reactions. Jesus is the perfect example: born into a poor family, breaking religious rules, honouring the rejects of society, making people think about their questions rather than giving a straight answer, rescuing us by dying a dishonourable death… The fact that God makes us think so much is the hardest part of being a Christian, but it ensures (at least some of the time) that we don’t slip into legalism or empty religiosity.