This series of more extended posts sums up my recent work on beauty in science and theology, and is reproduced (with permission) from the BioLogos blog. 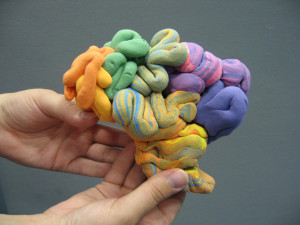 It is of course possible to appreciate the beauty of creation[1] intuitively, simply delighting in a scene full of colour, pattern and variety. We instinctively enjoy wide-open vistas, long stretches of clear water and high lookout points.[2] We also seem to value symmetry and order. But there is great pleasure to be had in training the senses to a higher degree of observation, and this is something that poets practice as well as scientists. W.H. Davies’ poem ‘Leisure’ encourages the cultivation of a deliberate habit of unhurried observation. I also love Elizabeth Barrett-Browning’s slightly caustic observation:

Earth’s crammed with heaven,
And every common bush afire with God;
But only he who sees, takes off his shoes,
The rest sit round it and pluck blackberries…

The discipline of science, with its long hours of observation and careful scrutiny of data, has helped generations of scientists to appreciate natural beauty. Jeff Hardin is Professor of Zoology at the University of Wisconson-Madison. He spends his days working on cell migration and development in the tiny (1mm long) worm C. elegans.

When Hardin teaches courses on cell and developmental biology, he tells his students that his main goal for the semester is that they would think cells, or embryos, are beautiful. He uses this quote from Einstein:

‘The most beautiful experience we can have is the mysterious. It is the fundamental emotion that stands at the cradle of true art and true science. Whoever does not know it and can no longer wonder, no longer marvel, is as good as dead, and his eyes are dimmed’.[3]

In his introduction to developmental biology Hardin uses some ancient Hebrew poetry: Psalm 139, where the writer is musing about embryonic development. David doesn’t understand the process of how his body was formed, but he knows that it’s fearful and wonderful. Hardin tells his students, “Whether you share David’s worldview – as I as a Christian happen to – or not, by the end of the semester I want you to share his sense of wonder about the incredible intricacy of developmental biology.”

The Beauty Revealed by Science

The things that scientists find beautiful might not be immediately attractive to the uninitiated beholder – though perhaps you can appreciate their enthusiasm. This is illustrated wonderfully in American Naturalist John Muir’s account of his travels through the Californian Sierra.[4] One particular episode shows his detailed observation and appreciation of nature, and also his great sense of humour and interest in (or tolerance of) people. He travelled in the company of an insalubrious shepherd, whose lunch every day consisted a piece of meat tied in a cloth and hung from his belt, dripping grease all over his clothes.

‘His trousers…have become so adhesive…that pine-needles, thin flakes and fibres of bark, hair, mica scales…and indeed bits of all plants, animals and minerals of the region adhere to them and are safely embedded, so that though far from being a naturalist he collects fragmentary specimens of everything and becomes richer than he knows…Man is a microcosm, at least our shepherd is, or rather his trousers. These precious overalls are never taken off, and nobody knows how old they are, though one may guess by their thickness and concentric structure. Instead of wearing thin they wear thick, and in their stratification have no small geological significance.’

It takes a born naturalist to go to such pains in describing a revolting old pair of trousers, and to even find beauty in them!

More seriously, physicists have appreciated beauty in symmetry, in order, and in complex systems that are reducible to a series of ‘elegant’ mathematical equations.[5] Biological systems are more complex and difficult to describe mathematically, so the beauty observed in the life sciences is more often to do with colour, pattern, shape, movement, or detail. At times, complex biological systems are understood at a level that does reveal their mathematical simplicity. When order emerges out of apparent chaos biologists begin to use words like ‘striking’, ‘beautiful’, and ‘astonishing’.[6]

The eminent theologian Jürgen Moltmann was fascinated by science and mathematics as a teenager, but the onset of WWII changed the course of his life, and after spending time as a prisoner of war he devoted himself to theology. According to Moltmann, beauty in science can be experienced as symmetry, simplicity, or unity. Beauty is seen most clearly when systems are moving from chaos to order, or vice versa. Moltmann is convinced that while scientific beauty is not worth seeking for its own sake, it is a sign that you are nearer the truth, and is not subjective. Beauty may be useless from a utilitarian point of view, but it is meaningful in itself.

Several of the ancient Greek philosophers taught that beauty is closely related to truth, and one could make a case for this in science and mathematics. A number of successful physicists and mathematicians have followed beauty in their search for truth, or see beauty as a confirmation that a theory models reality.[7] The Nobel Prize-winning physicist Subrahmanyan Chandrasekhar has even claimed that scientists with a highly developed sense of the aesthetic are more likely to make significant discoveries.[8] On the other hand, philosopher James McAlister has pointed out that there are trends in scientific or mathematical aesthetics, and scientific revolutions often involve a revolution in aesthetic perception. For beauty to model truth, the aspect of beauty in question must relate to some fundamental property of the universe.[9]

The exercise of working to understand a system and make sense of a collection of ideas and observations can be beautiful in itself. If a theory is developed that can be used to predict further experiments and explain other data, then it has its own intrinsic beauty.[10] We appreciate the order, unity and simplicity that it brings to our understanding of the world.

It was a sort of act of faith with us that any equations which describe fundamental laws of Nature must have great mathematical beauty in them…It was a very profitable religion to hold and can be considered as the basis of much of our success. –Paul Dirac

I think that the beauty seen in science falls into four broad categories. First, a scientist may find beauty in their experimental system, whether it is a model organism, a certain diagnostic printout, or an aesthetically pleasing series of molecules. Second, there is the cleverly devised experiment carried out with skill and patience that results in good clear data: the molecular biologist’s sharp DNA bands on a gel, the organic chemist’s high yield, or the physicist’s precise measurements. Third, the data and the theory that gathers them into a coherent whole may have an intrinsic beauty that is both striking and satisfying. Finally, there is the beauty that the scientist themselves brings to the data: the black and white telescope images that are coloured to distinguish between different wavelengths of light, elegant graphs, or a carefully crafted PowerPoint presentation filled with photographs of microscopic organisms.[11] Each of these four types of beauty involves characteristics that are intrinsic to the natural world, but also require observation, imagination and creativity on the part of the scientist.

Christian theology provides what I think is a satisfying explanation for our experience of beauty. The Bible describes a God who creates order out of chaos, and sets creatures in it who are capable of understanding and appreciating its harmonies and beauties. When we work with our head and hands to create beautiful and useful things, we are fulfilling our calling as people made in the image of God.12

CS Lewis understood our experience of beauty as a foretaste or reflection of the beauty of God’s restored kingdom described in the book of Revelation. If we are fascinated by what we see in creation and find it beautiful, or if it awakens something in us that we can’t put a name to, Lewis would say that we have a ‘desire for our own far-off country.’ The beauty of creation awakens something in us, and we want to find its source.13

We enjoy scientific beauty – the startling elegance of the mathematical solution, or the model that makes sense of what seemed to be a muddle of data – in the same way that we enjoy the serenity of a garden or carefully tended olive grove on a summer’s day. As Shannon Stahl said, it’s the beauty of shalom: not only is the prospect attractive, but it is also deeply satisfying, ordered and harmonious. To achieve that state the scientist, gardener or farmer has expended time and energy. Bringing order from chaos, watching things develop and become chaotic again and bringing order once more using reason, creativity and imagination, is one of the most fulfilling experiences in life. The process is usually protracted, complicated, expensive and often painful, but we somehow have the drive to do it over and over again. To me, the Christian teaching that God has made us in his image using a long and complex process in order to work out our own processes in the world, makes perfect sense of this experience.

This series will continue with Part 3: Beauty and the Character of God

[1] I try to avoid using the words ‘nature’ or ‘the natural world’ as much as possible because of the ambiguity of the word nature, which is often wrongly used to create a divide between natural and supernatural worlds. This is ancient Greek philosophy and has nothing to do with the God of the Bible. When addressing Christians I usually use the word ‘creation’ in its traditional theological sense, meaning ‘everything that exists apart from God’, without connection to any one particular interpretation of Genesis 1-3.

[2] Wilson, E.O. On the Origin of the Arts, reprinted from The Social Conquest of Earth, Liveright, New York, 2012. Carroll, N. On Being Moved by Nature: Between Religion and Natural History, in Kemal, S. & Gaskill I. (Eds) Landscape, Natural Beauty and the Arts, Cambridge University Press, 1993, pages 244-266.

[6] Crick, F.H.C. Elegance in scientific theories & The beauty of the double helix model; Conway Morris, S. Does the evolutionary narrative tend to support theism? (Lecture at the Faraday Institute )

[8] Chandrasekhar, S. Beauty and the Quest for Beauty in Science. Fermilab, 1979.