This series of more extended posts sums up my recent work on beauty in science and theology, and is reproduced (with permission) from the BioLogos blog.

One thing I ask from the LORD, this only do I seek:that I may dwell in the house of the LORDAll the days of my life,to gaze on the beauty of the LORDand to seek him in his temple. 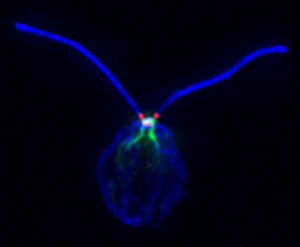 Fluorescent image of Chlamydomonas algae showing location of Fa2p enzyme at the base of the cilia,. © Dr. Lynn Quarmby.

As a biologist, I am fascinated by the fluorescent-on-black images of cells, 3D rotations of protein structures, and cross-sections of colourful tissue samples that grace the covers of scientific journals. I have spent whole weeks staring down a microscope at the beautifully transparent bodies of developing fish embryos, and whenever possible I illustrate my written work with photographs of the natural world. I’m not alone. In the institute where I did my PhD we had a basement full of microscopes and imaging technology, and it was considered important to have beautiful images in your presentations—movies were even better. The journal Nature: Cell Biology always features striking images on its covers, and in an editorial these photographs were described as works of art in their own right. In fact, ‘scientific art’ has become a recognised genre, and displays of science-related images are increasingly popular in research institutes, museums, science festivals and other public spaces.

Indeed, a number of practicing scientists have devoted their time outside the lab to communicating the beauty and wonder of science to the general public.[3] One of these is Dr. Lynne Quarmby, a cell biologist who’s passionate about explaining her work to people outside of the scientific community. She writes a regular column, a ‘nexus of mystery, art, literature, beauty and science,’ for the online literary magazine Numéro Cinq.

If we can recognize and acknowledge that our direct biological senses, as wonderful as they are, give us only a tightly pinched and cloudy view of the world, then we open ourselves to unimagined beauty.

Biologists often label themselves according to the ‘model organism’ that they work on. I was a zebrafish person, and Quarmby is a Chlamydomonas person. Chlamydomonas is not an STD (you’re thinking of Chlamydia), but a gentle single-celled algae that is in all likelihood swimming around the standing water in your garden as you read. This microscopic creature is easy to grow in the lab (a jam jar on a sunny windowsill will do), its genome has been sequenced, and it is a surprisingly powerful tool for studying human disease.

Chlamydomonas was not an obvious choice for medical research, but the secret is in the cilia. Cilia are hair-thin appendages that wave around in a coordinated fashion to move their owner from A to B. But these algae don’t spend their whole lives swimming around. When they reproduce, their cilia are absorbed back into the cell body (scroll to the 4th video here). When conditions are stressful, the cilia simply drop off. Quarmby and her students studied Chlamydomonas mutants that hold on to their cilia, and discovered a family of proteins involved in the regulation of both cilia and cell division.

At the same time as Quarmby was studying the behaviour of cilia in Chlamydomonas, medical researchers were identifying genes that are mutated in humans. The same proteins involved in cilia and cell cycle control in Chlamydomonas were affected in some patients with polycystic kidney disease. What’s the connection? Cell biologists knew that most of our cells have cilia on them, but assumed that they were not important. Our cells generally do not swim around, unless they’re sperm. It turns out that these tiny appendages are involved in a whole range of vital cell functions. The cilia on kidney cells are important for sensing the flow of urine, and without these the kidney cannot function properly.

Perhaps beauty is in the eye of the beholder when it comes to unicellular flagellates, but what I appreciate is the detail. To see the minutiae of cell structure is stunning, particularly when you know how difficult it is to achieve images like the ones below (click image for full resolution and source article in the journal Cytoskeleton). And little Chlamydomonas, a microscopic pond dweller, has advanced our understanding of a devastating human disease. This combination of aesthetic experience and elegant scientific explanation is what I find beautiful.[5]

It appears to be a universal experience for scientists to find beauty in their experimental systems. Perhaps this is because the daily discipline of examining anything in detail brings an appreciation of its finer points. Or maybe the process of choosing something to study and then spending the greater part of one’s waking hours staring at it provokes something akin to the loyalty of the mother who thinks her child is beautiful, despite the large pimple on its nose. But even bearing in mind the fascination and devotion of the true professional, there seems to be something more in the scientist’s experience of beauty.[6] Most, I think, simply delight in the beauty of creation. For some, this gives a sense of the transcendent: a sort of natural spirituality. For a Christian, this encounter with beauty draws them nearer to God.

Christian Appreciation of Beauty in Science
One of the driving forces behind the work of many of the early scientists was their Christian faith. The astronomer Johannes Kepler (1571-1630) initially hoped to pursue theology, but was eventually satisfied that science was also a way to glorify God.[7] Many others, including the famous naturalist John Ray (1627-1705), were ordained clergy in addition to their academic studies, so their science and theology were naturally interwoven. Others, like James Clark Maxwell (1831-1879), examined Christianity as rigorously as their scientific experiments.

These pioneering scientists (or ‘natural philosophers’, as they called themselves back then) were encouraged by a rich tradition of theology that wholeheartedly encouraged their exploration of creation. The Hebrew Scriptures tell how creation reveals the glory, generosity and faithfulness of God who created and sustains everything.[8] The beauty of the land and everything in it is celebrated: mountains and trees, plants and animals, men and women.[9]A number of the earliest Christian theologians, the Church Fathers, often expressed their delight in the details of animal and plant life, and what we now understand as ecosystems.

Diversity of beauty in sky and earth and sea…the dark shades of woods, the colour and fragrance of flowers; the countless different species of living creatures of all shapes and sizes…the mighty spectacle of the sea itself, putting on its changing colours like different garments, now green, with all the many varied shades, now purple, now blue.

Augustine, The City of God

Theologian Jame Schaefer has surveyed the writings of many of the Church Fathers and Medieval theologians, and found five broad themes in their contemplation of creation.[10]

One of my favourites among the theologians covered in Schaefer’s work was an unnamed Cistercian who in the twelfth century wrote extensively about the grounds of the abbey in which he lived, and the surrounding countryside. He was obviously very happy with his vocation, and had a good understanding of the interconnectedness of the different factors: water, weather and crops – an early ecology. Basil of Caesarea (ca. 329-379) spent time observing animals and plants, noting similarities and differences, and encouraged others to do the same, giving glory to God for everything he saw. Hugh of Saint Victor (1096-1144) delighted in what his senses could tell him about creation, so enabling him to praise the Creator all the more, and lamented that others might pass such an opportunity by.

An important Medieval figure in the early development of science is Albert the Great (ca. 1200-1280), teacher of Aquinas, who wrote on “the importance of observation and experimentation in field and laboratory studies of animals, plants, metals, and inorganic elements”. He carried out field studies, and “legitimised the study of the natural world as a science within the Christian tradition.” For him, appreciation of creation had both cognitive and emotional aspects. For all of these early scholars, to study creation and enjoy its beauty was an activity that everyone should engage in using their God-given intellect. Their detailed exploration of the wonders of the universe was fuelled by faith in a benevolent creator God, and this deep intellectual study led to heartfelt praise for the one who made it. Is this something we can share?

This series will continue with Part 2: Understanding Beauty in Science.

[3] A few examples are Sean B. Carroll’s Endless Forms Most Beautiful; Denis Noble’s The Music of Life, and Neil Shubin’s, Your Inner Fish.

[4] I should highlight that as far as I know Lynn Quarmby is not religious and has not in any way endorsed this blog.

[6] I try to avoid using the words ‘nature’ or ‘the natural world’ as much as possible because of the ambiguity of the word nature, which is often wrongly used to create a divide between natural and supernatural worlds. This is ancient Greek philosophy and has nothing to do with the God of the Bible. When addressing Christians I usually use the word ‘creation’ in its traditional theological sense, meaning ‘everything that exists apart from God’, without connection to any one particular interpretation of Genesis 1-3.</em)