Beauty, awe and vulnerability: The sea and Scripture 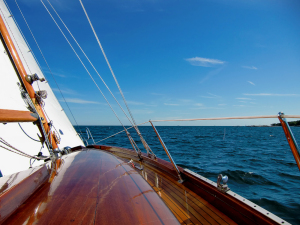 My father loves sailing and anything to do with the sea, so I grew up hearing him joke from time to time, ‘I’m a bit worried about going to heaven, because the Bible says there will be no sea!’ I think the part he was referring to was Revelation 21, ‘Then I saw a new heaven and a new earth, for the first heaven and earth had ceased to exist, and the sea existed no more.’ Of course my dad knows that the writer of Revelation was using metaphor to describe the future, but his quips have left me thinking about what the sea meant for people at that time.

Meric Srokosz, the Associate Director of the Faraday Institute, shares my father’s interest in what the Bible has to say about the sea. He spends part of his time in Cambridge and the other part in Southampton, working as Professor of Physical Oceanography at the National Oceanography Centre.

When he came to Faraday in October 2012, Meric brought Biblical scholar Dr Rebecca Watson on board, and together they have been looking at ‘the sea in Scripture’. Their aim is to study the Biblical material on the oceans in order to develop a theology of the sea, and think about how Christians should treat the ocean, the creatures living in it and the resources it contains.

One of the things Rebecca has looked at in this study is the great fear and vulnerability that the Old Testament writers felt in relation to the sea. Here were forces over which they had no control, and they relied on God to protect them. There was also a sense that trying to completely master the sea is an act of pride against God – that we are most at home on land, and can’t fully ‘own’ the sea. 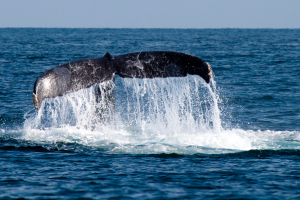 More positively, there was a feeling of wonder and awe in some passages, and an appreciation that the great dangerous beasts in the sea could be a source of pride and enjoyment to God, even though they seemed to offer nothing useful to humankind. Job and the Psalms are great examples of this, with ‘Leviathan’ frolicking in the waves[1]. Finally, some of the biblical writers saw the fish in the sea as a finite resource that needs protection.

Having lived in ships for months as a time, Meric can identify with the Biblical writers’ sense of vulnerability and awe. “You realise how big the world is and how puny human beings are… Scientifically we know a lot more, but it’s [still] beyond our control… When you’re stuck in a force eleven storm in a rather small research ship in the middle of the North Atlantic and there’s not much help around, you get an impression of the majesty of creation, the scariness of some of it, the force of the waves and the winds … and then you see a pod of pilot whales swimming around, and they appear to be enjoying themselves, body surfing down the front of breaking waves!” 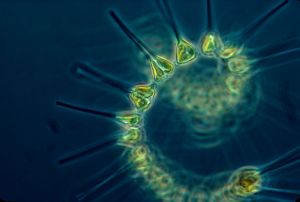 The sea is also a source of great beauty. One experience that created a lasting impression with Meric was the “spectacular sight” of seeing flying fish “skimming across the waves”. On another trip, his team collected some seawater at night and took it into the darkened lab. The water was full of microscopic phytoplankton, which glow in the dark. When stirred, Meric said it looked “like a bucket full of little twinkly stars.”

In the end, Meric said, this study of the sea and Scripture has turned up “both things that confirm what I’d expect or that gel with my experience, and other things that have challenged my thinking… for example sometimes the ocean seems to be seen in a negative light… We need to understand why that is and what the implications of that are.” They have also “found some surprising things, which have the potential to help us to think about God’s creation and how we should regard it… like the intrinsic value of life in the ocean… the sense of awe and the sense of the oceans being a place where humans do not exist easily.”

I was fascinated to hear that Meric has found so much in common between his own experience and the Bible’s very ancient perspective. There is much here to help us understand our own relationship to the sea and the ways in which our activities affect its inhabitants, both large and small.