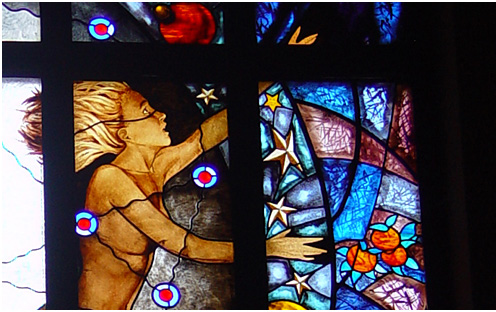 Awe is an important part of the experience of science – one could almost say it’s a universal. When a scientist feels awe it is usually in response to something complex, precise, ordered, powerful or beautiful. There is an element of unexpectedness and delight, maybe even respect, fear or reverence. Awe always involves the need for some sort of mental adjustment or accommodation: we need to make room in our internal map of the world for this new and amazing experience. The physicist Werner Heisenberg vividly described this process of taking on board a startling new concept when he wrote of his discovery of atomic energy levels:

In the first moment I was deeply frightened. I had the feeling that, through the surface of atomic phenomena, I was looking at a deeply lying bottom of remarkable internal beauty. I felt almost giddy at the thought that I had now to probe this wealth of mathematical structures that nature down there had spread before me.

Moments of awe are the rare high-points in science, both rationally and emotionally. Finally something is understood. That understanding and the new possibilities it opens up are wonderful, and the story is told and retold. Scientists, as you might expect, respond scientifically, with new questions and investigations. But they also respond in other ways depending on their personalities: aesthetically, using visual representations of the data in different ways; philosophically, as they discuss the ethical implications of the research or the surprising intelligibility of the universe; or spiritually, as they try to make sense of those feelings of awe and wonder at the immensity and beauty of the world.

When Elaine Howard Ecklund carried out some research into the beliefs of scientists in elite US universities, she discovered a surprising fact: 20% of the people that she and her research team spoke to were not members of any religious group, but considered themselves spiritual. For some of these scientists the experience of beauty, awe and wonder in their work led them to believe that there is something beyond science – one could perhaps call it ‘transcendent’ – an experience that motivated some of them in their research, their teaching, and their lives outside of the lab. I remember having a conversation with a colleague who had experienced something along these lines, so I’m not surprised to hear that many others feel the same.

According to the scientist-theologian Alister McGrath, experiences of the transcendent might involve a sense of the ‘numinous’ – a feeling that something ‘other’ might be behind what one is seeing. Or perhaps someone might encounter a deep truth about the unity of reality that strikes them in a particular way. Perhaps more common would be a moment of unexpected clarity – what some might call an epiphany – where suddenly things make sense. Experiences that might be called ‘transcendent’ are rare, but they leave a lasting impression.

The language used by many scientists when they describe the process of discovery is of a reality that was always there. Perhaps it’s not surprising that scientists are ‘realists’; they think that there is a real world outside of ourselves that waits to be discovered. Science does not answer the ultimate questions about the universe, but scientists are human beings so we just ask those questions anyway – sometimes looking for answers in unexpected places.

This post was previously published on the BioLogos blog, Science and the Sacred, and is reproduced here with permission. See also Awe and responses to it, which provided some of the stimulus for this piece. Part 1 here.