Antony Hewish: A Life in Science and Religion 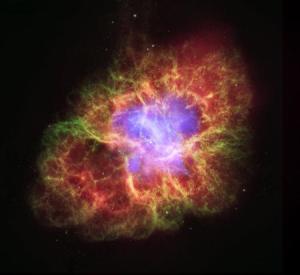 The Crab Nebula, with a pulsar at its core. NASA

Last month, the Nobel Prize-winning physicist Antony Hewish spoke at the Faraday Institute on ‘My Life in Science and Religion – A Personal Story’. Professor Hewish described himself as more of a practical experimentalist than a philosopher or mathematician, and his life story certainly reflects that – though I think he understates his own intellect in a very Cambridge way. He clearly enjoyed his work in radio astronomy very much, and his insights into the compatibility of science and faith are very interesting.

Antony Hewish was the youngest of three boys, and thanks to their parents’ open-mindedness, they created a workshop in the family home – over the bank that their father managed. Hewish’s early experiments with electricity fused the lights of not only the whole house but those of the bank below! He left school in 1942 with reasonable enough grades to get him into Cambridge, but only if he studied ‘physics with radio’ – thanks to wartime demands for radio engineers. After spending most of his first year rowing, Hewish failed to pass to the next year and was sent to the Royal aircraft establishment to work on development of radio systems. After a few months he went to Malvern to work on radar jamming systems. Here he learned a good deal more about electronics, and was even allowed on some test flights to try out the equipment.

In 1946 Hewish was able to return to Cambridge to complete his studies, and this time he worked hard. He got a better degree than his tutors expected, and was accepted as a PhD candidate in Physics. Martin Ryle had also been working on radio during the war, and was now running a research group at the Cavendish (physics) laboratory looking at the behaviour of radio waves in the upper atmosphere. Hewish applied to work with Ryle, and so joined a group that was to become famous for starting modern observational cosmology on its course.

Ryle’s team worked hard to create huge arrays of radio antennae, building and operating them by hand. Hewish enjoyed the camaraderie of teamwork, but also managed to establish his own area of research. His PhD thesis was on the twinkling of galaxies caused by charged clouds of particles high in the ionosphere. Even as a PhD student Hewish felt the privilege of discovery. He remembers cycling back home past the rugby ground after measuring the speed of ionic clouds over the ground for the first time. He was sampling data at greater heights than anyone before, and at that moment was the only one who knew what was happening in those atmospheric layers. He went on to develop an interest in quasars, and developed his own antenna array to detect them. It was with this antenna that he and his research student Jocelyn Bell Burnell discovered pulsars – the discovery that led to his Nobel Prize.

As a schoolboy Hewish went to chapel every day and twice on Sundays, but he didn’t feel very ‘religious’. His first spiritual experience was not in church, but on the golf course. One of his brothers was interested in model aircraft, so Hewish was always roped in as an assistant to help fly them. They would often go out early in the morning to get the right conditions for flying, and on one beautiful day, he had a feeling that he described as ‘the presence of a benevolent power behind the universe’. Only later did he learn the word ‘numinous’ from the theologian Charles Raven – but that is what he experienced.

Hewish never experienced any complications in being a physicist and a Christian. He finished his seminar by saying that a number of people regard science and faith as complementary, but he would take it further and say that science is actually a great help to understanding religion. The concept of God is mysterious, particularly when he chooses to reveal himself through a man two thousand years ago. Even the most basic physics is similarly mysterious, but that doesn’t mean the physics is not right.

For example, a glass of water doesn’t seem at all mysterious. Water contains a lot of hydrogen – the simplest element. Quantum physics tells us that an electron in orbit around a hydrogen atom is behaving in extremely strange ways, being affected by ‘virtual particles’. It’s hard to believe: common sense says that this behaviour cannot happen, but the measurements say that it does.

So for Hewish, physics helps him to get into the right frame of mind to realise that religious mysteries can exist and can be reasonable without defeating common sense. If matter even at its most basic level is more complex than you could ever dream, then we should not be afraid of mystery when it comes to God.