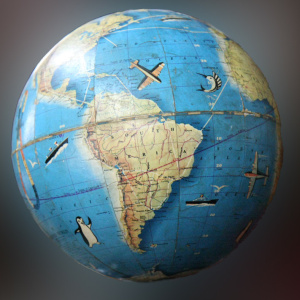 This week’s post was first published on the BioLogos forum. I was invited to write something about my experience of science and faith internationally. So far, we have launched the Test of Faith resources in the UK, US, and Brazil, and they are being published in a number of other countries where we have set up collaborations with local groups. I have found that although each country has its own particular issues, there are a number of commonalities between Christians in this area.

Christianity is an international movement. Denominations, mission movements, and well-known writers or speakers can share new ideas quickly, and even more so today with air travel and the internet. For Evangelicals, Young Earth Creationism has travelled around the globe, but the other views that Christians hold have not always been explained. Discussions like the ones that are held at at BioLogos are not available in every language, so people may be uninformed about the different biblical perspectives on Genesis.

I have often been in situations where Christians hold widely differing views on creation, but we always have our core beliefs in common. Starting from that point, I have found that we can always have a fruitful discussion. There is often a worry that working in or studying science is a threat to faith, but stories of scientists who are Christians in the top ranks of academia show that this is not the case. I am always grateful for the men and women who are happy to make their faith public, and help students to think about how faith and science work together.

Presenting the range of views on creation can be contentious, and I have at times tended to shy away from this topic. What I have realized is that very few people judge this to be a ‘primary’ issue for Christians: we are not discussing whether or not there is a creator, but how that creation happened.

So an open discussion is welcomed, particularly when people have the opportunity to put forward their own views. Young people in particular are always glad to be informed about the dialogue that is happening on these issues. It can be a relief for them to find out that the one book they may have on their shelf is not the only way for Christians to think.

The Test of Faith resources also include a good dose of history and philosophy of science, because that is extremely useful for banishing myths about the relationship between science and faith. In recent decades, it has become increasingly recognized among professional historians of science that Christianity made a very positive contribution to the development of modern science. These stories are extremely encouraging to Christians, because the feeling can often be that science has always been ‘off limits’ for a serious believer.

Ideas about law-like behaviour, the intelligibility of the universe, and of experimentation all have deep roots in Christian theology. Most of the early scientists were Christians, and the medieval universities happily taught theology and ‘natural philosophy’ as part of the same curriculum. They saw science as a way to worship God by exploring his creation. This information has not yet made its way into the public arena. Ted Davis and other historians and philosophers of science are doing all they can to help people understand the real story of what happened.

The other commonality for Christians around the world is a need to understand what science is like, and how scientists today can worship God through their work. That was the subject of my recent post for the BioLogos blog, and is the main goal of this blog site.