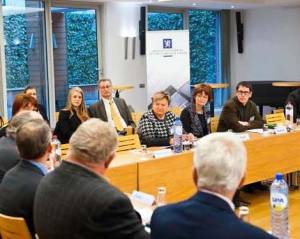 Scientists in Europe are concerned about values. A massive new research and innovation programme called Horizon 2020 was rolled out last December, with the first round of grants being awarded this summer. A number of people have been raising questions about some of the ethics behind this effort, and in November last year they came together at a workshop on “The Value(s) of Science”.

Horizon 2020 is the second biggest source of non-military funding for scientists after the US National Institutes of Health. It already includes allowances for legal or ethical differences in each country, accountability structures to prevent academic fraud and plagiarism, a ban on the creation of embryos purely for research purposes, and many other ethical guidelines.

Professor John Wood, Secretary General of the Association of Commonwealth Universities and chair of the Christians in Science board of trustees, felt that other values needed to be included in the mix. For example, one of the aims of Horizon 2020 is to see economic returns on the money invested, ‘taking great ideas from the lab to the market’. One third of the funding is already earmarked for ‘excellence’ in science, or what I would call fundamental research to advance our basic understanding of the world, but some scientists feel that even this supposedly ‘blues skies’ research funding comes with added pressure to see long-term financial gain.

Economics is not the only way to measure success in science. We need to look at the wider benefits of research for society in general, on a long as well as short term. Some of the effects of science on human flourishing, such as the peace of mind that improved medical treatment can bring, are difficult to measure in a grant report. Wood felt that the decision-makers in Europe were open to discussing these values, so with funding from the Templeton World Charity Foundation and the support of The Faraday Institute, he set up an initiative to address these questions about ethics and values in science.

Dr Diana Beech is the researcher behind much of the work on this project, including a survey of researchers across Europe, and she has built a network of European policymakers who are interested in seeing change in this area. Beech has found that “the initiative has been met with great support – not only from grassroots researchers, who feel their hopes and aspirations for the future of European science have become increasingly overlooked in policy-making discussions in recent times, but also from Brussels itself, where a whole host of policy-makers and advisors have been particularly amenable to discussing the ‘big’ questions behind European science – namely what’s it all for, and where’s it all going?”

One of the recurring themes of this project has been trust. Like any profession, science includes ‘its fair share of fools and scoundrels’. There have been several cases of fraud among European researchers, so the previous EU science funding-programme – FP7 – included new checks to keep scientists more accountable. The new system was tighter, but it still didn’t prevent fraud, and it involved so much paperwork that 13,000 researchers signed a petition asking for reform. Horizon 2020 involves less red tape but the question remains – how can a scientist be kept accountable without losing the freedom that is an essential part of creative research?

One solution has been proposed by Karin Markides, president of Chalmers University of Technology, Sweden. A “virtuous circle” is begun by training young researchers in ethics and management as well as research techniques. “A university that trusts and supports researchers attracts the greatest scientists. They produce great science. And then they feel a sense of responsibility that great work continues at the university – in their own labs and that of others. That attracts more greatness, and the circle continues.”

Is the system that Markides proposes enough to achieve the balance between trust and accountability that we need in science? The discussion is open to all on the project’s Facebook page and Twitter profile. Researchers can also contribute their opinions on the direction of European science policy through the EURAXESS-initiated Voice of the Researchers network, through which Dr Beech helps to channel researchers’ needs and expectations directly to the EU-level as part of its core multipliers group.

I personally am pleased that these conversations have been taking place between researchers and policymakers in Europe, and I hope that they bear fruit over the next seven years.