Born into a vicarage family in Sunderland, Dr Thomson grew up in Sheffield when the major employer was the steelworks.

He met his wife Jean when they were both at school. Their teenage romance eventually led to marriage.  They have four children.

Bishop David read English at Oxford and completed his doctorate there, examining how Latin was taught in the late Middle Ages. After graduating he taught at a college of education before coming to Cambridge to read Theology and train for the Christian ministry at Selwyn College and Westcott House.

Experienced in both urban and rural areas, he was appointed Curate in the mining town of Maltby, Yorkshire, before joining the Banbury Team Ministry in Oxfordshire, where he was responsible for a huge area with new housing developments. A highlight was the planting of two new church communities, one a shared project bringing together Anglicans, Roman Catholics and Brethren. He then went on to serve as Rector in the gem market-town of Cockermouth in Cumbria. In 2002, he became Archdeacon of Carlisle and Cathedral Canon, and in 2008 was made Bishop of Huntingdon in the Diocese of Ely. He was also Acting Bishop of the Diocese of St Edmundsbury and Ipswich in 2013-15. He has a national role as Chair of the Schools Development Group for the Church of England.

Bishop David has published a series of devotional books as well as continuing to study and write as a mediaevalist, in recognition of which he was made a Fellow of the Society of Antiquaries of London. His hobbies include exploring the countryside and its antiquities, gardening, looking at paintings, reading old detective stories and doing the crossword. 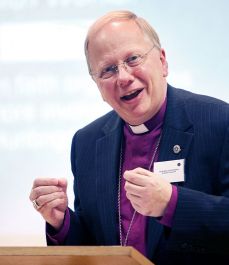