David has been a Baptist Minister for 20 years, undertaking initial studies at Regents Park College Oxford. He was Baptist Union President from 2018-2019 with a theme of “Divine Windows – Glimpses of God in Life, the Universe and Everything”. After 12 years as Senior Minister at Croxley Green Baptist Church, he stood down from local church ministry in April 2022 to work as a Baptist Missioner in Science and the Environment.

Prior to ministry, he studied Physics and Astrophysics at Leicester University and gained a Doctorate in Atmospheric Physics at Imperial College, London in 1986. He worked for 15 years at the Met Office and European Weather Centre researching clouds in weather forecast and climate models and participated in several international projects. In 2021, he completed a Masters in Applied Theology at Regents Park College, Oxford focusing upon the dialogue of science and theology with a dissertation “When Higgs, Hubble and Berger meet – A Theological Reflection on Scientific Imagery as Providing Signals of Transcendence.”

David has taken an active interest in the interface of science and faith, and climate change, within both the Baptist Together network of churches and wider Christian Community. He convenes BUEN – the Baptist Union Environment Network – and chairs the John Ray Initiative, an environmental education charity connecting science, the environment and Christianity. David has taught at several theological colleges and on the Southern Counties and Central Baptist Associations “Footsteps” local leadership training programmes. He sits on the grant board of “Scientists in Congregations,” part of the Equipping Christian Leaders in an Age of Science project at St John’s College, University of Durham.

As “Dr Dave” he co-ordinates the “Messy Church Does Science” project which uses science experiments to help families to explore the wonder of creation and the wonder of the creator, now used in Messy Churches in several countries. He also led the development of the follow-on project “MESS-AI Church” exploring robots, AI, and faith and is the science advisor for “Messy Church Goes Wild – Adventures.” He is also a regular speaker with “God and the Big Bang,” exploring science and faith issues with both primary and secondary school students.

Dave takes an interest in history and diverse cultures, watching films and science fiction and reading an increasingly diverse range of books from science fiction to ancient Roman detective stories. He has a collection of Lego space craft – from the Saturn V moon rocket to the Space Shuttle, enjoys cooking – particularly Mediterranean and Middle Eastern. He likes to take time walking among the hills of The Peak District and the mountains of Italy. 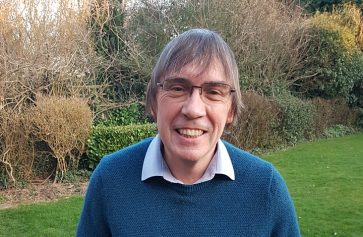