Prof. Humphreys has received numerous honours and awards, most recently a Royal Medal of the Royal Society (2021); the Kelvin Medal and Prize, Institute of Physics (1999); award of an honorary D.Sc. from the University of Leicester (2001); the European Materials Gold Medal, Federation of European Materials Societies (2001); and the Robert Franklin Mehl Gold Medal, The Minerals, Metals and Materials Society, USA (2003). Prof. Humphreys is also very involved in the public understanding of science, having served as Selby Fellow, Australian Academy of Science (1997); as Fellow in the Public Understanding of Physics, Institute of Physics (1997-99); and as President of the Physics Section of the British Association for the Advancement of Science (1998-99).

Colin Humphreys is a materials scientist who has carried out valuable work on the electron microscopy of semiconducting materials. His world-leading research on gallium nitride (GaN) has resulted in a substantially improved understanding of this important material with a wide range of technological applications. In addition to its potential use within transistors as a next-generation alternative to silicon, GaN emits a brilliant light that makes it an ideal candidate for use in energy-saving LEDs. Colin has pioneered the development of low-cost, high-efficiency GaN-on-silicon (or ‘GaN-on-Si’) LEDs, which are now being manufactured based on his patented research. GaN LED lighting could save the United Kingdom £2 billion per year in electricity costs.

In parallel with his scientific career, Colin has devoted considerable time and effort to communicating materials science to lay audiences.  He publishes and lectures extensively in the field of science and religion, and has a particular interest in the application of scientific knowledge to the understanding of the historicity of the Biblical text. This work led to his being awarded a CBE in January 2003 for services to science as a researcher and communicator, followed by a knighthood in 2010. Since 1996, he has also been a Fellow of the Royal Academy of Engineering.

Recent publications in science and religion 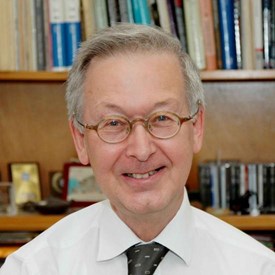