Professor Irene Tracey holds the Nuffield Chair of Anaesthetic Science and is Head of the Nuffield Division of Anaesthetics and is Associate Head of the Medical Sciences Division/School at the University of Oxford, England. Irene did her undergraduate and graduate studies at the University of Oxford and held a postdoctoral position at Harvard Medical School. Over the past 16 years her multidisciplinary research team has contributed to a better understanding of pain perception, pain relief and nociceptive processing within the injured and non-injured human CNS using neuroimaging techniques. More recently, they have been investigating the neural bases of altered states of consciousness during anaesthesia. In 1998, Irene helped to co-found the now world-leading Oxford Centre for Functional Magnetic Resonance Imaging of the Brain (FMRIB) – the centre integrates research into key neurological and neuroscientific problems with cutting-edge developments in MR physics and data analysis (http://www.fmrib.ox.ac.uk). The Centre has approximately 110 scientists and clinicians from a range of backgrounds and Irene was its Director from 2005 until 2015. She has been appointed the new Head of the Nuffield Department of Clinical Neurosciences – a 450 person strong department comprising the FMRIB Centre, Division of Neurology, Nuffield Division Anaesthetics, Nuffield Laboratory Opthalmology and the Division for Prevention of Stroke and Dementia. She will take up that post September 2016.

Irene has served and continues to serve on many national and international committees, including the International Association for the Study of Pain as an elected Councillor until 2014 (Chair of the Scientific Program Committee for the Milan 2012 biannual world congress), Deputy Chair of the MRC’s Neuroscience and Mental Health Board until 2014, the REF 2014 Psychology, Psychiatry and Neuroscience panel until 2014, and is co-Chair of the Canadian CERC panel and a member of the Brain Prize selection committee. In 2008 she was awarded the triennial Patrick Wall Medal from the Royal College of Anaesthetists and in 2009 was made an FRCA for her contributions to the discipline.

In 2015 she was elected a Fellow of the Academy of Medical Sciences. She is married to Professor Myles Allen, a climate physicist, and they have three irrepressible children: Colette (18), John (14) and Jim (9). 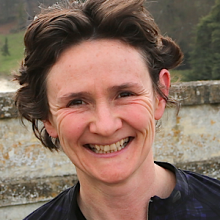