Geoffrey Cantor is Professor of the History of Science at the University of Leeds. With a background in physics he moved first into the history of physics, with a focus on optics. His interest in the issues of science and religion first gelled in his research on Michael Faraday and Faraday’s involvement with the Sandemanian church. His research in this area has subsequently developed in several directions including the 1995-96 Gifford Lectures at Glasgow (with John Brooke) which explored the uses of history in our understanding science-religion interrelations. He has also researched the attitudes towards science of small religious communities – specifically the Quakers and Anglo-Jewish communities – in eighteenth and nineteenth-century Britain. His other main research focus is the SciPer project, which examines the role of science in the general periodical press of the nineteenth century.

Main publications in the area of Science and Religion are: 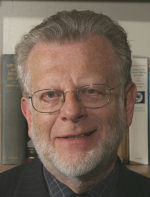