Professor David Sedley is Laurence Professor of Ancient Philosophy, a Fellow of Christ’s College, Cambridge and a Fellow of the British Academy. Well known for his wide ranging work in ancient philosophy, recent books include The Midwife of Platonism: text and subtext in Plato’s Theaetetus (2004) and Creationism and its Critics in Antiquity (2007). 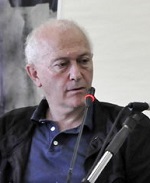