Chris Done grew up wanting to be Spock from Star Trek, so doing a PhD in Astrophysics at Cambridge was living the dream. She worked on theoretical models of the intense high energy X-ray radiation which can be produced when material falls towards a black hole, before it disappears forever below the event horizon. She then moved to the USA, to NASA, Goddard Space Flight Center, and started to work more with observational data from these systems. An unexpected highlight was that she became part of the team doing real time control of an X-ray telescope in the payload bay of the Space Shuttle!

She returned to the UK, first to Leicester University and then to Durham, where she became one of the first women to be appointed as a Physics Professor. She now specialises in combining the best current theoretical models of what happens to material falling towards a black hole with the best observational data, working especially with the Japanese Space Agency (JAXA) using their innovative X-ray satellites. So she gets paid to do rocket science, and think about black holes! 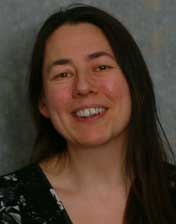