It’s a pleasure to be able to introduce The Faraday Institute for Science and Religion– a new kid on the block since the last ‘Science and Archives’ edition of ARC was published.

Named for Michael Faraday, the renowned chemist, natural philosopher and man of deep religious faith, the Institute was founded in 2006 within St Edmund’s College, Cambridge, by molecular biologist Dr Denis Alexander and geologist Prof. Robert White, FRS. In 2018 it became an independent charitable organisation and an Associate Member of the Cambridge Theological Federation.

An interdisciplinary research institute aimed at improving public understanding of science and religion, it seeks to shed new light on life’s big questions through academically rigorous research in the field of science and religion; to provide resources for those with interests in science and faith through research dissemination, education and training; and to catalyse a change in attitude towards science and faith through outreach to schools, colleges, the scientific community, religious institutions and the general public.

All kinds of topics meet and mix at the Institute. As I write this, one of my philosopher colleagues is on the phone discussing work on the metaphysics of resurrection; others are preparing the tech for tomorrow’s lunchtime seminar on Evolution and the Social Brain; and, over in the Youth and Schools office, dinosaurs are being herded into a book.

My own role is itself multidisciplinary: I was hired in December 2019 as the Institute’s first archivist and librarian, with a roomful of books to catalogue and no perceptible archives.

Several reasons have made it necessary thus far to concentrate almost entirely on the library work, but I’ve been gradually gleaning a sense of the Institute’s background and how it operates and finding out what records there are, might be or should be.

Since it’s a part-time post, I’d only had a month’s worth of working days before the building we’re in was closed in the first Covid lockdown. However, with the building open again, I’ve started winkling out prospective archives from nooks and crannies—coming across a cluster of hard drives; seeing records-managementy-looking boxes appear from rearranged offices; quizzing the ranks of  DVDs perched above shelves of tea- and coffee-pots in the editing room: ‘Are you really masters?’

The main series of records I expect to be part of the archive are the usual array of administrative records, including grant-funded project files and records of our Trustees and the International Advisory Board;  materials produced by the Institute, chiefly the audio-visual recordings from our conferences, study days, summer schools, courses, seminars, special lectures, etc. (currently 800-plus), as well as Faraday Papers, books and articles, web-based resources; and private papers of individuals prominent in the science and faith arena.

At present, the Faraday’s been offered material from two scientists—the first one being an impetus to their seeking an archivist—and more are anticipated.  Add to this class a small quantity of ‘Stealth Archives’—letters, cuttings, ephemera perhaps from fieldwork or conferences found interleaved in books in our library that were given to us from individuals’ working libraries.

There’s a lot of nuts-and-bolts archival work that I’m undertaking for the first time, since I’ve never been a lone archivist, and have certainly never started a service from scratch before!

The to-do list includes policy-writing, creating an accession register and forms such as deposit agreements and copyright declarations, figuring out appropriate storage places ‘at least for now’, establishing processes, workflows.

And then there are the scary-seeming Big Things to learn, like getting to grips with digital preservation for the operational records and the mass of the Institute’s born-digital audio-visual and textual output. Cue the timely offering this summer by the DPC and TNA of the ‘Novice to Know-How’ online course, for which I was very grateful!

One bit of daydreaming beyond the basics is that I’d like to start an oral history collection—another thing I’ve never done! There’s a tranche of people who have been giants in the science-and-faith field in the later 20th century to the present who are retiring or already quite elderly, and, as a still-young organisation, we have an assortment of emeritus directors and other early associates who are still happily bouncing around. A set of conversations with all of these would richly complement our historical record. ‘Use your specimens while you can,’ as C.S. Lewis said.

The Institute’s thought of hiring an archivist early on in its life deserves a gold star. That said, what archives are and what archivists actually do is, in fact, a bit of a mystery to most of the team, so another challenge is learning how to advocate for the archives and the archival process, the hows and the whys, at all levels of the organisation.

It’s been funny writing about an archive that isn’t yet. But it will be, and this has given me a nice chance to pause and reflect.  Perhaps in next year’s edition I can write an update on how it’s been developing.  In the meantime, there’s plenty to feed your curious minds on our web site, www.faraday.cam.ac.uk. ‘Would you upload your memory?’, anyone?  If you can find mine, please let me know! 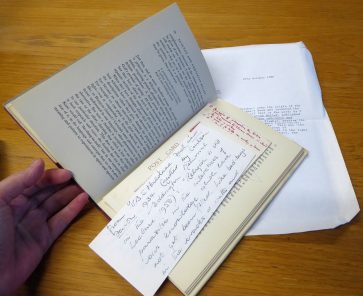