God Made The Dinosaurs

From the diplodocus to pterodactyls, God Made the Dinosaurs is jam-packed with fascinating facts and interesting information about the creatures that once roamed earth, sea and sky.

This beautifully illustrated book will teach 7- to 9-year-olds all about dinosaurs, from the familiar T-Rex to lesser-known species, highlighting how these and other prehistoric creatures show the wonder of God’s creation.

God Made the Dinosaurs combines science and religion to show the variety and wonder of God’s creation through time in a beautiful, fully-illustrated book for children aged 7 to 9.

Children will love learning more about their favourite dinosaurs, as well as discovering how we know about these incredible creatures. God Made the Dinosaurs looks at how we’ve learned from fossils and genetics, and introduces palaeontologists and other scientists who have contributed towards our understanding of God’s creation.

Produced in collaboration with The Faraday Institute, and with Jesús Sotés’ incredible artwork bringing every page to brightly-coloured life, God Made the Dinosaurs will teach kids how science and religion can work together to teach us about the world that God has created and fill them with awe for the majestic creatures that walked the earth so long ago.

Michael and Caroline Carroll live in Colorado. Both from a science background, Michael has had articles published in periodicals including Astronomy, Popular Science, Smithsonian and Time. Mike and Caroline have written several books which combine science and religion for children, including Absolutely Awesome: The Things God Has Made (Tyndale), Dinosaurs! (David C Cook), I Love God’s Green Earth (Tyndale) and the God’s Creation series (Zondervan).

Jesús Sotés is a self-taught Illustrator based in Pamplona, Spain. For several years he was a graphic designer for different studios and advertising agencies, and has worked as an illustrator for clients including British Airways, Hermes Paris, Pepsi China and The Guardian. Jesús’ illustrations are bold, impactful, and full of texture, designed to capture our attention from the start. 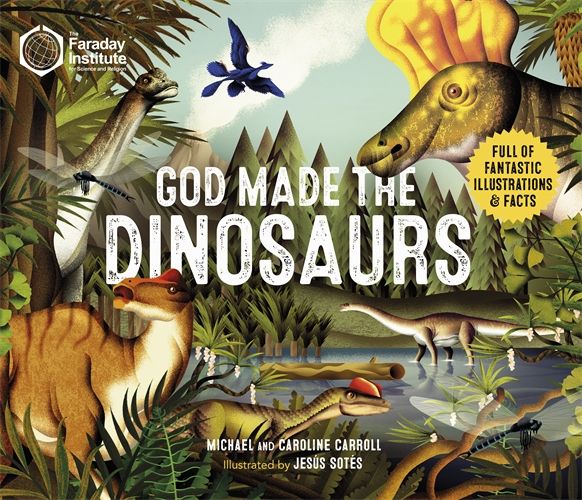