What is the relationship between science and Christian faith?  Are the two mutually exclusive, or can they interact and learn from each other?  Does Christianity have anything to contribute to the scientific and ethical challenges facing the world?

In BEYOND BELIEF scientists Denis Alexander and Bob White, active in the biological and geophysical sciences respectively, introduce the debate for the interested reader.

For those seeking understanding of a complex and often controversial subject BEYOND BELIEF provides a straightforward and authoritative introduction, readily accessible to those with no scientific background. 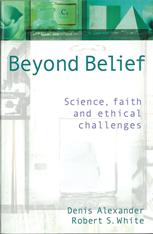