A film by Emily Downe for our latest report ‘Science and Religion’: Moving away from the shallow end.

A short animation by Emily Downe, that travels through a whirlwind of questions surrounding the science and religion debate. The film invites the viewer into the details of the conversations, where there is less conflict than it seems from far off.

The film was inspired by our recent report ‘Science and Religion’: Moving away from the shallow end, which is the culmination of a three–year project with Theos done in partnership with The Faraday Institute for Science and Religion researching public and elite attitudes to science and religion in the UK today.

It is our hope that the film will be a powerful tool for classroom learning, transforming a complex concept into an accessible and personal format, stimulating conversation and encouraging pupils to think about the questions science and religion bring about. 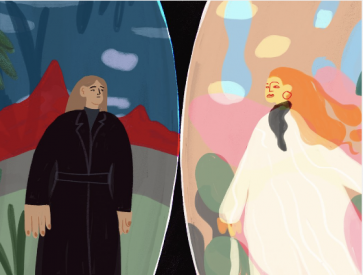