Hannah Waite unpacks her latest report ‘The Nones: who are they and what do they believe?’.

“Perhaps the most striking fact about religion in Britain is that over half of the adult population say that they don’t belong to one.” Says Stephen Bullivant, Professor of Theology and the Sociology of Religion at St Mary’s and co–author of the Dictionary of Atheism:

Over the last fifty years, there has been a lot of noise about the growth of the non–religious population, often referred to as ‘Nones’. In fact, they are now the fastest growing group in the UK, with 53% Britons now identifying as non–religious. Although not yet published, it is widely expected that the upcoming 2021 census results will find a similar trend.

Understanding this half of the population, is the focus of our newest Theos report, The Nones: who are they and what do they believe?

The report shows that only 51% of those who identify as a None say they don’t believe in God. With 27% agreeing with the statement that “I don’t know whether there is a God, and I don’t believe there is any way to find out”, and a further 14% believing not in a personal God but a higher power of some kind. In this way, we have hard data to show that selecting the non–religious box (i.e. identifying as a None) on surveys does not necessarily mean that an individual is always hostile to religion or an atheist.

Rather, our data identifies three clear and distinct groups of Nones that emerge. All self–identify as Nones but each group demonstrates quite a remarkable degree of difference in attitudes, beliefs and outlook.

The first group are what we call the Spiritual Nones 80% of them believe in some form of the supernatural. This group have colloquially been called the “Spiritual but not religious.” However, we found this might not always be the most helpful description. The beliefs about God and religion of Spiritual Nones are just as varied as those who are religious, with a quarter of them believing in God to varying degrees. A further 36% believe in a higher power of some kind rather than a personal God, and 61% believing that humans are, at heart, spiritual beings. The Spiritual Nones demonstrate that though an individual identifies as non–religious, it doesn’t mean they don’t believe in anything. Instead, the findings of this report highlight that many of those who sit within this group do believe in certain forms of spirituality and the supernatural.

The second group, which we are calling Campaigning Nones, are overwhelmingly atheists, with 80% of them agreeing with the statement, “I do not believe in God” (compared to just 11% of Spiritual Nones). Campaigning Nones are hostile to religion, with 78% believing religion is comparable to the smallpox virus and 65% viewing religion as a form of child abuse. We have named them Campaigning, as they are a group of individuals who are actively speaking out against religion and its place in society. In short, Campaigning Nones do not see any value or worth in religion, but as an evil, and as such believe that there is no place for religion in the modern world.

The final group, Tolerant Nones, are just as atheistic as Campaigning Nones, but without the animosity to religion. Over 70% of Tolerant Nones disagree that religion is comparable to the smallpox virus or that it is a form of child abuse; this is a drastic change from Campaigning Nones. In this sense, we see that Tolerant Nones are not as hostile to religion and appear to adopt a “live and let live” attitude. Simply, they are individuals who are comfortable with their atheism and do not feel a need to promote it.

These findings (taken at the same time as the 2021 census data) not only identify who the Nones are in the UK today, but also provide insight into the diversity that exists within this population. It highlights the fact that to understand this large section of the UK population as either spiritual but not religious or fervently against religion, God and spirituality does them a disservice. Rather, this report provides a nuanced approach to understanding the non–religious and demonstrates that non–religion is a much more interesting, varied, and at times, confusing category than is often assumed.

Hannah joined Theos in 2019. She has an undergraduate degree in Psychology and Counselling and a PhD in Practical Theology both from the University of Aberdeen. She is particularly interested in mental health, disability and theology and was a founding member and community developer of Friendship House Aberdeen, a movement towards creating an inclusive community for adults with and without disability. She is working on Theos’ Religion and Science project. 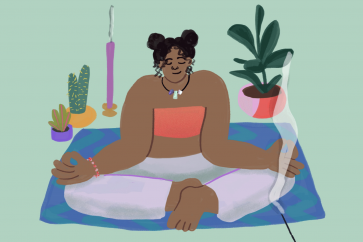