It is with great sadness that we report the death of cosmologist, mathematician and physicist, John Barrow who died at his home in Cambridge on 26 September 2020 at the age of 67. He was the Professor of Mathematical Sciences and Director of the Millennium Mathematics Project (MMP) at the University of Cambridge, and at the time of his death, Dean of Clare Hall. He was a member of The Faraday Institute International Advisory Board and a Fellow of the International Society for Science and Religion.

John received his DPhil in astrophysics from the University of Oxford in 1977, and first caught wide attention with his 1986 book, The Anthropic Cosmological Principle, co-authored with Frank J. Tipler.  He authored or co-authored more than 25 books which were translated into more than two dozen languages, he wrote more than 550 scientific papers, almost half as single-author,  together with an award-winning play, Infinities which was performed in Italian and Spanish. He was a renowned expositor of scientific and mathematical ideas as seen in the demand for lectures on cosmology at the Venice Film Festival, Windsor Castle, 10 Downing Street and the Vatican Palace. His many web and magazine articles, popular lectures and podcasts illuminated the public understanding of the universe and helped to cast the intrinsic limitations of scientific inquiry into sharp relief. His book 100 Things You Didn’t Know About Maths and Sport, led to the appointment of the MMP as the sole official provider of mathematical education relating to sport and the 2012 Olympic Games.

John Barrow’s research, principally that of a theorist, was extraordinarily far ranging. In his career he created fruitful new interfaces between different areas of mathematics, physics and astronomy. Many blossomed into large fields of research – chaotic dynamics in general relativity, the discovery of finite-time singularities in cosmology, ‘fine-tuning’, and the search for astronomical probes of possible time variations in the constants of physics. Blessed with a phenomenal memory, he remained remarkably productive during the past year of chemotherapy for cancer with a book and 11 papers.

Heather Templeton Dill, president of the John Templeton Foundation, reminds us that ‘while John’s notable achievements will be remembered for decades to come, he was also a good friend with a gracious spirit who could move easily between discussions about math and science to matters of religion and faith and detailed statistical analysis of soccer’. John and his wife Elizabeth were long-term members of the United Reformed Church, Cambridge and we extend our deep condolences and sympathy to Elizabeth and their three devoted children and families. 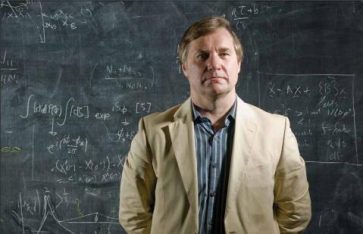