Notes from a volcano: Prof. Bob White reflects on his experience of the recent eruptions in Iceland

Notes from a volcano: Prof. Bob White reflects on his experience of the recent eruptions in Iceland

Robert (Bob) White, FRS, is Professor of Geophysics at Cambridge University and Director of The Faraday Institute. He has recently published a book on Natural Disasters called Who is to Blame? Nature, Disasters and Acts of God.

In the last few weeks, the world has watched as a new burst of seismic activity in Iceland led to a dramatic eruption near the volcano Bardarbunga. Bob White, Professor of Geophysics at Cambridge University, heads up a research team who have been recording earthquakes caused by the massive underground flow of magma. Unusually for a full-time Professor, Bob is also the Director of the Faraday Institute. In this guest post, he describes the wonder of this spectacle and how it relates to his own faith. 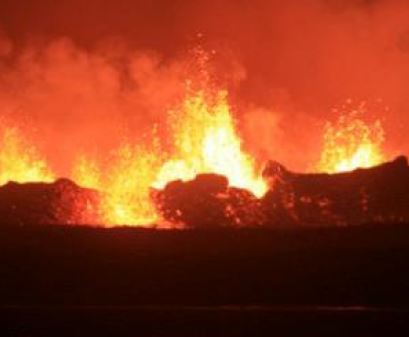 We arrived at the eruption site around midnight on 1st September. My team and I were part of just a handful of people allowed into the 10,000 square kilometre exclusion zone a black volcanic desert 2,000 feet high. The darkness of the night was uninterrupted by any human lights, and we knew there was no-one else within at least 100 kilometres of us in any direction.

The tail-end of Hurricane Cristobal had passed through the day before, creating a sandstorm that obscured the fissure. Above it towered a cloud of steam and gas that could be seen for miles around. The smoke was dirty orange in places, and trailed tendrils of sandy-coloured streamers. Gas measurements showed dangerously high levels of sulphur dioxide.

In the night we got upwind of the eruption and had a spectacular firework show. This was creation at its rawest, better than the most inventive art installation. Behind us the sky shimmered green with waves of Northern Lights pierced by pinpricks of stars. In front of us was a wall of deep red flames as lava fountained 300 feet and more into the sky. The molten rock fell to earth as balls of glowing crimson which quickly faded to a deep red and then black as their outsides cooled. When they hit the cinder cones around the fissures these black balls exploded in flashes of orange, and a stream of glowing lava spilled over and coalesced into a flowing river of deep red molten rock.

Over the next few days we continued to return to the site, on two occasions rescuing our seismometers only a few tens of metres from the approaching lava. The molten rock progressed unstoppably across the gravelly plain. Not even a river could halt its flow it just boiled the water and moved on, progressing a thousand metres or more every day.

The raw power of a volcanic eruption has to be experienced to be understood. It assaults all the senses simultaneously: the eyes with the depth of the colours; the ears with the jumbo-jet sound of the fountaining fire and continuous tinkling of breaking glass as the lava front chilled and avalanched forward; the nose by odours reminiscent of the smelliest chemistry lab at school.

As a scientist, I knew that every second more than 400 tons of molten rock at over 1000 degrees Centigrade was being spewed out of the fissures in the ground. This eruption continually produced the same amount of energy as a Hiroshima-sized nuclear bomb detonated every two minutes for hour after hour, day after day, week after week. Gases and water vapour from the eruption spread across northeastern Iceland, forcing people with respiratory problems indoors.

The eruption was awesome in the proper sense of the word. As a Christian believer, this demonstration of the raw power and beauty of God’s creation resonated deeply with the Bible’s description of God as powerful and sovereign over his creation. It’s a creation in which God takes huge pleasure, and which he pronounced as being “very good”. In contrast, humans cannot even begin to slow the eruption or even to divert the flow of lava.

Everyone who witnessed what happened in that lonely place in the middle of Iceland, far from any human constructs, was awe-struck. It seems to me that it is part of God’s grace in making us in his image, able to relate to him in a personal way, that we humans can all feel the visceral power and pleasure in such natural processes. Everyone can experience that, whether or not they acknowledge God as the ultimate creator.

I know it was a huge privilege to be there, yet the same sense of closeness to God’s creation can come at almost any time. Often it pops up unexpectedly in the course of our everyday lives: in the stillness of mist hanging low over a meadow or a street in the early morning; in the sudden trill of a bird in the midst of a city; in the beauty of a single flower that catches our attention; in the flutter of a butterfly’s wings; in the crash and tumble of waves on a stormy coast; in the silence of a starry night. What a great reminder these are of the presence of a living, loving God and of the hope we have of an ultimately renewed creation as we live out our lives in the midst of an often confused and struggling world.