The Faraday Institute for Science and Religion is delighted to announce the appointment of Professor Keith Fox as its new Director.

This appointment takes place as Professor Bob White FRS retires as Director, after eight years in his role as the head of the Institute. Prof. White along with Dr Denis Alexander founded The Faraday Institute for Science and Religion in January 2006 as an institute within St Edmund’s College but Prof. White’s engagement with science and faith goes back a long way further.

Throughout his time as Director Bob White was Professor of Geophysics in the Department of Earth Sciences at Cambridge leading a large academic research team. He was often seen taking students on field trips and involved in many other projects. We thank Bob for his inspiring leadership over the past 8 years and are grateful for all that he has done. We are pleased that he will continue to be actively involved with The Faraday Institute leading the disasters project.

Keith Fox has been Associate Director of The Faraday Institute and Professor of Biochemistry at the University of Southampton where he has previously been Head of the Centre for Biological Sciences. He studied Natural Sciences in Cambridge, specialising in Biochemistry, and completed a PhD in the Department of Pharmacology in 1980. He was a Research Fellow at Emmanuel College, before moving to Southampton as a lecturer in 1987 and became Professor in 2000. He is Senior Executive Editor of Nucleic Acids Research. His research interests concern DNA structure and its recognition and his scientific work has been published in over 200 papers and articles. He is a former chairman and trustee of Christians in Science and is Editor of Science & Christian Belief. He is also a licensed lay minister in the Church of England. 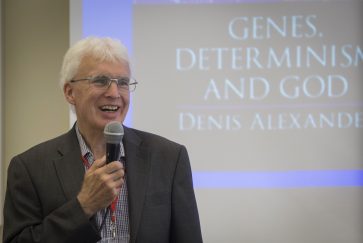