Varieties of Atheism in Science

In this lecture, the authors of Varieties of Atheism in Science (Oxford University Press 2021) will present core findings from a survey of over 1,200 atheist scientists in the US and the UK and 81 in-depth interviews. They will explore what everyday atheist scientists think about religion and the limits to what science can explain, atheist scientists’ views on meaning and morality, pathways that led to atheism in science, and more. The lecture will also include an opportunity for attendees to submit questions for a Q&A session moderated by Dr. Ruth Bancewicz of The Faraday Institute for Science and Religion in Cambridge.

This lecture is co-sponsored by The Faraday Institute for Science and Religion in Cambridge and the Ian Ramsey Centre for Science & Religion at the University of Oxford. 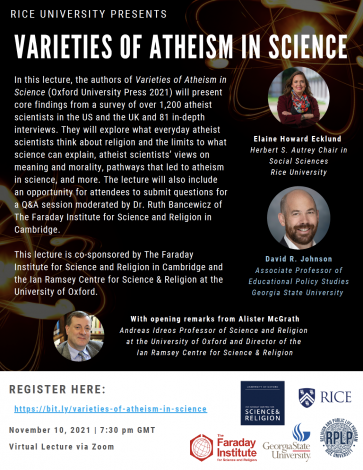