The foundation of Yellowstone National Park (USA) in 1872 can be taken as the start of what has become the modern global conservation movement. But Yellowstone NP was born in conflict and generated further conflict with the indigenous people of the region. Its foundation reflects a particular ‘Western’ cultural concern born out of a particular ‘Western’ cultural construction of nature and biblical romanticism, which caused this human-managed landscape to be perceived as wilderness.

Being also a time of growing scientific awareness, conservation practice has come also to reflect the Western-dominated cultures of science, especially of ecology and evolutionary biology, both of which are crucial to modern environmental stewardship. However, science is technical. It depicts nature as biodiversity, and its culture lacks a lexicon of love that reflects the true relationship between people and nature that motivates us to conserve, and so constructs psychological concepts such as biophilia and nature deficit disorder, which fail to engage us spiritually. Yet, it has become clear that biodiversity is best conserved in a holistic context of local spiritual engagement with creation, expressed through the significance of sacred sites. In this talk I will suggest that the marriage between faith and conservation is not merely desirable, but essential if we are to have a sustainable future on this beautiful planet, unique in the solar system, that has been entrusted to our care. 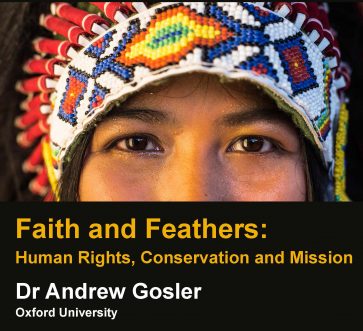