One way in which we commonly narrate the transition from the medieval to the modern world is through an alleged rejection of final causes or purpose in nature. The question of teleology, which is now widely debated in theology and the natural sciences, becomes particularly acute in the area of human consciousness and intention: how can non-purposive, sottish matter give rise to intentional consciousness which rationally deliberates and seeks goals that explain action? This paper will discuss final causation in wider nature and conscious intention. Following hints in the work of the nineteenth century philosopher Félix Ravaisson and the twentieth century theologian Hendri de Lubac, the paper will argue that every human conscious intention is, implicitly or explicitly, however inchoately, a ‘desire for God’ in the form of an ultimate orientation to a final end, namely truth as such. 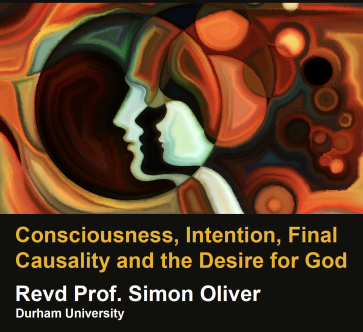 Consciousness, Intention, Final Causality and the Desire for God