Can Nature Be Red In Tooth And Claw? Augustine And The Christian Traditions

Can a Christian account of evil accept an understanding of nature as ‘red in tooth and claw’ from the outset?  At the core of Augustine’s theology, and the theological systems that shape the Augustinian tradition, is an approach to evil based on privation theory.  Privation theory asserts a primal purity and a Fall subsequently corroding the originate state.  On the face of it, such an approach would seem to be the cause of decay, cataclysm, animal predation, and pain in the natural world.  This view wholly conflicts with later understandings of evolutionary development.  In evolutionary science, such violence is endemic; hence, so-called ‘natural evil’ is an essential and ongoing operation within the physical and biological world.

This lecture challenges the standard presentation that Augustine argued for privation as the cause of physical and biological decay and so should be understood as contradictory to an evolutionary understanding.  Alternatively, it presents the basis to understand Augustine’s approach as treating natural cataclysm and violence as an originate facet and essential activity within the natural world and so integral to natural history, not as a consequence of a Fall.  His later interpreters who claim him as an authority asserting that the natural world became alienated from God after the Fall, and only then began experiencing such physical and biological disturbances when violence and destruction were introduced into nature, have in fact misconstrued his position.  This investigation is necessary to defining whether one doing theology in an Augustinian tradition can readily support biological evolution, must reject evolution if affirming Augustinian theology, or needs to alter the Augustinian approach to evil.  In analysing these issues, the lecture more broadly serves as a case study in working through issues of apparent conflict between theology and the sciences. 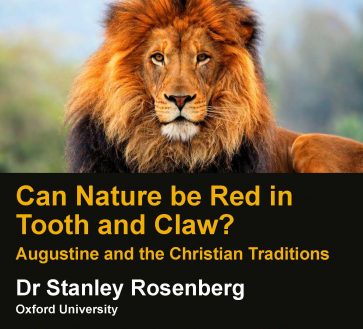 Can Nature Be Red in Tooth and Claw In The Thought Of Augustine? (a cast study)