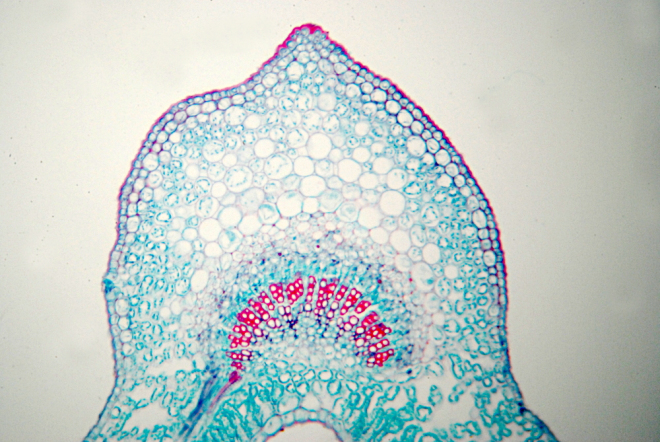 Most scientists get excited when talking about science in general.  But they get really animated when talking about their own area of research. I spent my PhD years studying microtubules, which are microscopic filaments inside living cells, and even now I get a little misty-eyed when thinking about them. To some people, microtubules might not be beautiful – in some images they look rather like a writhing hairball or bowl of spaghetti – but to me, they are full of wonder.

Microtubules are the largest of three kinds of filaments that make up the cytoskeleton.  The cytoskeleton organizes and gives shape to the cell, just as the bones that make up our skeletons give structure to our bodies. Unlike the bones in our bodies, however, the cytoskeleton is incredibly dynamic, changing shape with the needs of the cell. Microtubules play an essential role in how cells divide and move, and they also act as intracellular “highways” along which molecular motors carry “cargo.” 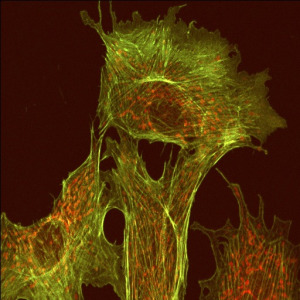 Each microtubule is a hollow structure made up of repeating units of a protein called tubulin.  Microtubules grow and shrink in a stochastic (i.e. random) fashion as tubulin subunits bind to or unbind from the existing structure. This “dynamic instability” is influenced by a large number of other proteins that bind to microtubules.

Cell division is elegant and beautiful, and it happens with exquisite precision most of the time.  Each of us began life as a single fertilized egg cell, but the average adult has an estimated 37 trillion cells!1  On a daily basis, millions or even trillions of new cells are formed to replace dead or damaged cells.

When the cell prepares to divide, the chromosomes (strands of DNA) condense, are duplicated, and align themselves in pairs in the center of the cell. Meanwhile, the microtubules rearrange themselves so that they form two radial arrays on opposite ends of the cell. The microtubules then grow and shrink until they make contact with a special place on each chromosome. Chemical and physical cues cause the microtubule bundles to “reel in” the duplicated chromosomes toward opposite ends of the cell so that each of the resulting daughter cells will have a full, identical complement of DNA. 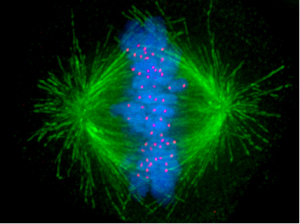 As a graduate student, I often felt that it was a gift to be able to study these astonishing intracellular events we had captured on film.  Biologists have learned so much about the deep inner workings of living cells, but perhaps even more it has taught us how much we don’t know.  Many of the scientists I worked with during those formative years, and many whom I interact with now in my work at BioLogos – both Christian and secular alike – are surprisingly humble in this respect. They are constantly feeling their way at the boundary between known and unknown, and the quest to learn more is what gets them up in the morning.

For many Christians, the jaw-dropping complexity and self-organization we have discovered inside the cell seem like clear evidence of ‘Intelligent Design’. I wholeheartedly believe that God created the universe and everything in it, but not in the way that those believers envision. The evidence does not seem to suggest that God created by zapping new intracellular structures – not to mention entire species – into existence. He could have done it that way, but the scientific data are consistent with the view that they emerged very gradually over the history of life (3.5 billion years or so).

I see all life forms appearing under God’s providential guidance, according to the natural laws he set forth and sustained by his hand. So rather than the image of God as engineer or software designer, I prefer the image of God as slow and steady artist, weaving a tapestry of great beauty in all creatures great and small.

Dr Kathryn Applegate earned bachelor’s degrees in biophysics and mathematics at Centenary College in Shreveport, Louisiana, where she co-wrote an undergraduate biophysics textbook still used in Centenary’s biophysics program. Kathryn received her Ph.D. in computational cell biology from The Scripps Research Institute (TSRI) in La Jolla, California, in 2010. There she developed computer vision algorithms to measure the remodeling activity of the cell’s internal scaffold, the cytoskeleton. In addition, she developed mathematical models of cytoskeleton dynamics to investigate how its activity at the molecular level contributes to higher-order processes such as cell migration.

Kathryn is now the Program Director of BioLogos, where she leads the Evolution & Christian Faith grants program and enjoys writing and speaking on science and faith topics.