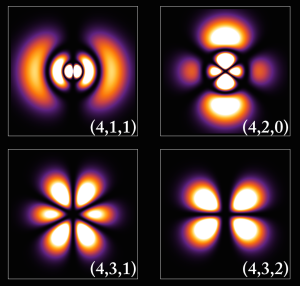 Why is there so much symmetry in nature? I shared some examples in an earlier post, and questioned whether there was a link between these and the ‘fine-tuning’ of the universe. I asked Francesca Day, a PhD student at the University of Oxford, if she could investigate. Francesca’s own work is on the astrophysical signatures of dark radiation, and here she explains why she thinks symmetry might lead to a more wonderful explanation of the universe than the mystery of fine-tuning.

Many argue that if the laws of physics had been just slightly different, life – or at least life as we know it – would not have been possible in the universe. The fundamental laws and parameters of physics seem to have conspired so as to make the formation of life possible. To many it seems as if science is pointing to a designer of the universe who set all these parameters just right for us – as if science is pointing the way to God.

Some scientists invoke a version of the “anthropic principle” to explain fine-tuning. The idea is that there are many universes (or many different patches of our universe) with different values of the fundamental parameters. It is not surprising that we live in the universe or patch with parameters that allow life. However, this argument is pretty speculative and, some would say, something of a cop out.

So where might fine-tuning come from? Why do the laws of physics seem just right for life? Has God carefully crafted and adjusted them to allow our evolution? Is God like a piano tuner, meticulously tightening the strings of the universe until everything is just so? Or did God make a piano that could never be out of tune? Does the apparent fine-tuning in the laws of physics emerge from deeper, more fundamental laws? I, along with many other physicists, think it might do, and that those deeper laws might be symmetries.

Over the past 100 years, symmetry has emerged as the principle that underpins the physical universe. For example, Einstein’s Theory of Special Relativity is based on a symmetry between “inertial frames” – observers moving at a constant velocity with respect to each other. Einstein realised that the speed of light should look the same in all inertial frames – even if the observer is moving very quickly away from or towards the light source. This simple but counter-intuitive symmetry revolutionised our understanding of space and time. It forced us to realise that time is not the rigid path we once thought, but behaves as a fourth dimension whose progress depends on the motion of the observer.

Ruth explained how symmetries can lead to fundamental laws of nature via Noether’s theorem. In this way, the structure of the laws of physics is ruled by symmetry. The particles that make up all matter in our universe are also governed by “internal symmetries” – symmetries that do not depend on space or time but which govern the behaviour and interactions of the particles themselves. These symmetries determine much of the structure we see in the particle world.

As a Christian and a physicist, I believe that God created a world that we have the power to explore and understand. This includes seeking deeper and deeper theories for why the fundamental laws and parameters are the way they are. Rather than the traditional view of fine-tuning pointing directly to God, I see it as part of an invitation from him. Why is the universe just right for life? With this question, God invites us to explore his creation and to discover the underlying principles He wove into it.

For me, symmetry is an intriguing and beautiful potential solution to the fine-tuning problem. These glorious symmetries on which creation is based could take us beyond our picture of fine-tuning and point the way to a deeper understanding of the universe.

Francesca Day won the Christians in Science student essay prize in 2013, and has also written for the Huffington Post.