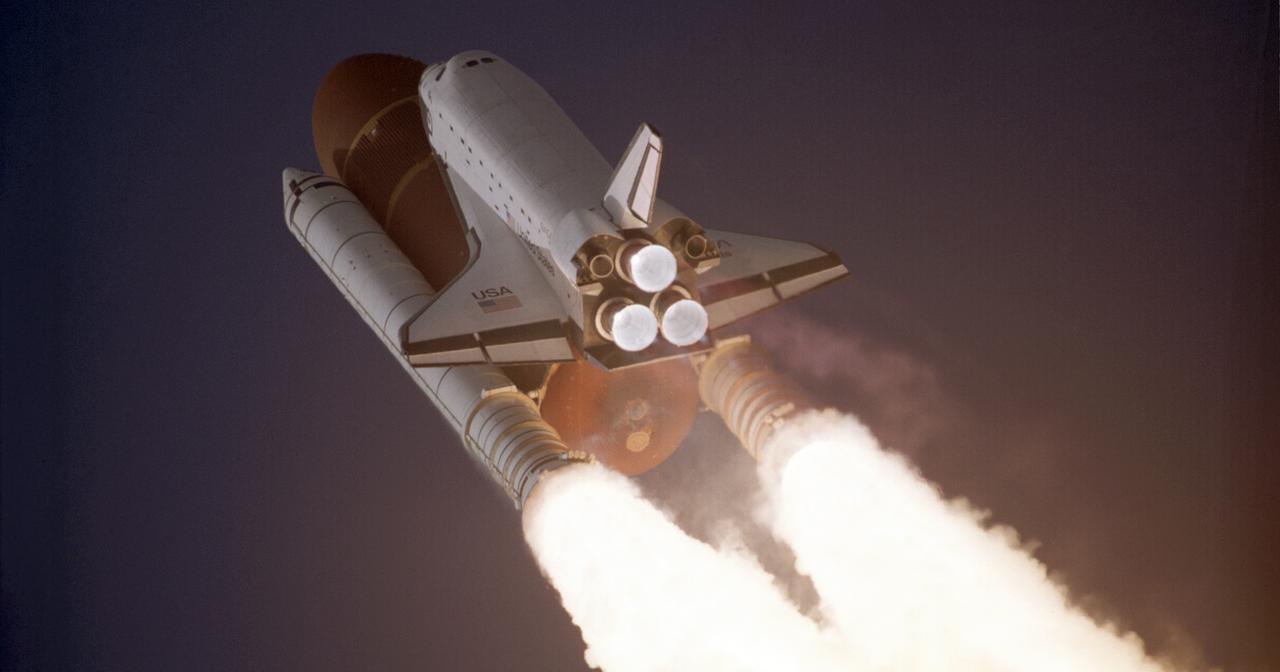 The US Space Shuttle at launch. Like Graham, this has been retired, but Its period of operation corresponds with Graham’s career in the space sector. Image Credit: NASA

Personal events that occurred in November 2001 were the first tremors which heralded the revelation that there was more to the world than the bits described by the physicists. The shockwaves that subsequently radiated from those tremors were to profoundly change my life. It was then, at the age of fifty-one, that God chose to reveal himself to me. I have no idea why he chose that time in my life, or why he decided to do it at all.

I was raised in a loving family that had no explicit faith in God, and consequently church attendance, or any other manifestation of religion, played no part in my upbringing. From a very early age I was captivated by science, which steered my education to culminate in a doctorate in mathematical physics in 1975. Subsequently, I spent a fulfilling career in space science and engineering, both in industry and academia.

During my time in industry, I had the opportunity to work on a variety of satellite projects, and led the Space Dynamics Group for a UK launcher programme. I was invited to apply for a post in the Aerospace Engineering Department at Southampton University in 1987 where I enjoyed twenty-three eventful years before my retirement in 2010. My principal research interest in latter years focussed on the environmental topic of space junk in orbit, which poses a threat to future space operations.  I also led the University’s technical training programme for the European Space Agency for twenty years, teaching as one of a number of instructors at a variety of ESA Establishments across Europe.

It was during those busy years at Southampton University that something very surprising happened – I came to faith as a Christian! How this happened was very much related to the issue of ‘science and faith’, and I wish to say something about this transformation in this brief account. Prior to this extraordinary event, I would have described myself as a tolerant agnostic, firmly entrenched in the notion that science had explained everything to the extent that any form of god was entirely irrelevant.

My story starts in the setting of a family holiday in Guernsey in the summer of 2001. Time by the pool gave me plenty of opportunity for reading and thinking, and I experienced a rare and startling insight about the nature of the Universe! This was along the lines of: the universe is defined by our existence within it. This is something that these days we call cosmic fine-tuning. The argument goes that the fundamental constants of the laws of nature have to take very precise values in order that life of any form can exist in the Universe. This kind of notion has been with us for some time in the form of something called the anthropic principle, that can be expressed as – the laws of nature must be constrained to allow human existence.

So why the big deal? The startling character of the insight arose because of the degree to which the fundamental constants have to be finely tuned. Most scientists are hard-headed about this, and agree that if it wasn’t so we wouldn’t be here to think about it. And they are quite right. But for me, by the poolside, it was the precision of the fine-tuning that was amazing. You could say that the Universe is an extremely unlikely place. Put another way, if you saw a well-shuffled pack of cards being dealt in perfect suit and numerical order, you might wonder how this could happen. Was it by blind chance (odds of 1 in 1068) or was there more to it? Was there something behind it?

Cutting a long story short, I pondered the options, one of which was a Creator God, and after many weeks of reflection I had arrived at a place in which I was comfortable with the notion that there may be such a deity. Given my background this was not an easy journey, but it did put me in a position where I could consider attending an Alpha course at the local church in the Autumn of 2001. My approach in the early weeks of the course was ‘head stuff’ – trying to understand everything before I believed. It was only later that the wisdom of St Augustine’s quote ‘I believe in order to understand’ dawned. During the Alpha course away day, a meeting with the numinous occurred, which I would now recognise as an encounter with the Holy Spirit. Although this was very unwelcome at the time, and to some degree alarming, nevertheless I finally had to acknowledge that there was such a thing as the ‘spiritual realm’. My wife Marion’s prayers over twenty-five years were finally answered!

Dwelling on all this subsequently, I believe that God used the science to ‘hook me’, but over the years he has revealed himself in so many other ways that he and the ‘spiritual realm’ are now part of my reality. I have been on a scientific and spiritual journey, and arrived at a point where I cannot deny him! One thing I have learned from all this, and in particular in the context of courses such as Alpha, is that people are convinced not by endless academic discussion of the issues, but rather by the simple means of personal experience of God’s transforming power in their own lives, and in the lives of others.

Read Graham’s story in more detail in From the Big Bang to Biology: Where is God? by Graham Swinerd and John Bryant (Nov 2020), £9.99, 263 pages. For more information, see www.bigbangtobiology.net.

Tags:  John Bryant, From the Big Bang to Biology: Where is God?, Graham Swinerd, mailchimp, spacecraft