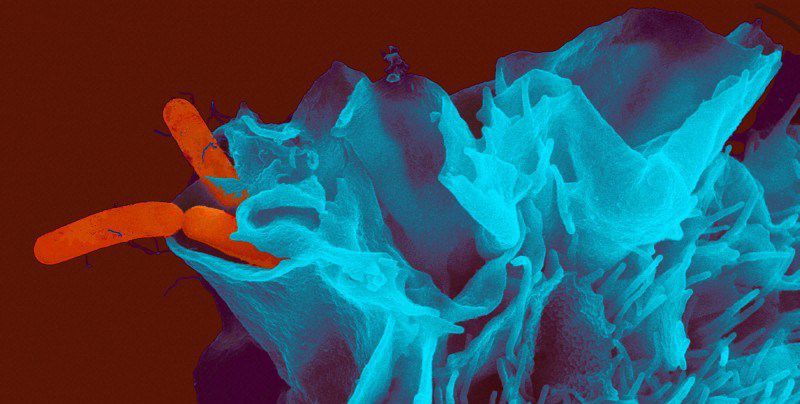 A horde of salmonella bacteria invades a mouse’s guts. The rodent’s immune system is on the alert, but something unusual happens. A minority of the invaders throw themselves onto the mouse’s colon bugs, even though their attack is too risky and they die. Their comrades take advantage of the breach, yet they are not as aggressive themselves.[i]

The berserk salmonella “are prepared to sacrifice themselves for the greater good”, a researcher explains. “You could compare this act to Kamikaze fighter pilots of the Japanese army.” This scenario raises the question, did they do that on purpose? Of course bacteria do not have conscious intentions, but it is at least possible that in another sense there is genuine purpose in this behaviour. This is also an important point from the perspective of Christian faith, which involves belief in a purposeful divine creation.

What if a minor change in the DNA caused the unusual behaviour of the salmonella? Then we might not be able to speak of genuine purpose. Such a mutation could be called an accident, and having switched the bugs into suicidal mode, it could soon disappear from the gene pool.

The kamikaze salmonella happen to be genetically identical to their surviving kin. The same genes are expressed in alternative ways, depending on the environment. Researchers speak of “bi-stability”: the same DNA information can lead to the organism showing this characteristic or that one. Other biologists call this “phenotypic plasticity”. Sometimes organisms with identical genetic patterns can look and behave differently, depending on environmental conditions.

Another example of an adaptation like this is the adjustment of an animal’s heart rate to the current situation. Again, changes are not dictated by central genetic command but result from a more complex interplay between various components of the organism and the environment. An animal can even change its anatomy: a grasshopper warps into a locust and back, depending on what’s going on around it.

These non-genetic adaptations can help an organism avoid premature death when circumstances change. Genes can sometimes catch up: in the next generations they may end up coding for the adaptation that saved them from extinction.

So who or what is pulling the strings when the organism adapts in this way? It’s not the genes, and it’s not a conscious decision. The organism is a complex system, and as its various parts interact, the organism steers its metabolism this way or the other. These kinds of adaptations are teamwork involving various mechanisms in the cell; they are not autocratic decisions by the genes, dutifully carried out by subservient processes. Genes continue to make a crucial difference in evolution, but these examples show that random genetic mutation is not the only game in town as far as adaptations are concerned.

Philosophers of biology often speak of “selected effects”. An organism’s characteristics come about as the genes in a population change across the generations. On this understanding, the individual organism does not respond to a changing environment. Its traits are backward looking: relics of the past that will take their carriers down with them if they turn out to be less advantageous. It’s as if organisms were rowing boats without a cox, propelled by a bunch of stoics who face the stern and won’t even turn their heads. The course has been set, and at the next bend in the river they are simply going to crash.

If an evolving population of organisms were purposive in the sense of making conscious choices, we would imagine a gondola, in which the rower faces the direction of travel, anticipates obstacles, and adjusts the course in advance. For example, some animals create tools, and a chimpanzee stashed away stones in order to throw them at zoo visitors hours later.[ii]

Phenotypic plasticity is neither strict rowing nor gondoliering. Phenotypically plastic organisms are goal-directed, adaptive systems, but they only react to what is going on around them at present. The organism reacts spontaneously, and a grasshopper turns into a locust. The rowers still face the stern, but they also turn their heads and adjust the course. They do not look far into the future, but they do take in their immediate surroundings. The rowing boat, or the organism, displays genuine purpose in adjusting the course now and again.[iii]

In their flexible self-organisation, organisms are directed towards the goal of self-preservation. From a Christian point of view, this is consistent with the belief that the creator brought about the world with a purpose. That humans and even functioning ecosystems exist and stick around is not just a coincidence. Contrast that with dysfunctional ecosystems and a barren planet. However, there is a snag in the story: from a faith perspective, the point of creation is not for creatures simply to preserve themselves or their competitive tribe. Whatever the ultimate purpose of salmonella may be: redeemed humanity will hopefully not be plagued by anything resembling a salmonella infection. Creaturely self-preservation is remarkable, even astounding in keeping creatures around, but that does not take creation all the way to redemption. God’s own saving initiative is necessary for such fulfilment, and that may require the self-preservation of pathogens to stop. Seen from that angle, biological purposefulness with its ingenious self-preservation marks both the glory and the misery of biological creation.

[iii] I am adopting this position from the secular philosopher Denis Walsh (2008), “Teleology”, in: The Oxford Handbook of Philosophy of Biology, ed. Michael Ruse (Oxford: Oxford University Press), 113-137.

Alexander Massmann is a Research Associate at the Faraday institute for Science and Religion. In collaboration with Prof. Keith Fox, he is preparing a book on human genome modification that discusses moral questions surrounding the latest genome editing technology (“CRISPR”). His background is in theology and theological ethics. He holds a Ph.D. from Heidelberg University, Germany, for a book dealing with the interaction of doctrine and ethics in Karl Barth’s work. An ongoing postdoctoral research project engages the dialogue between evolutionary biology and the Christian doctrine of creation. He blogs at genethicsblog.wordpress.com