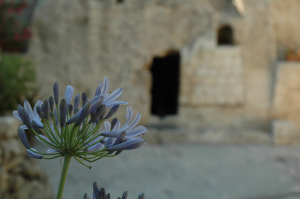 Following the popularity of the dating of the crucifixion, this week’s post is on another aspect of Sir Colin Humphrey’s work on science and religion – his work on miracles.*

Can a scientist believe in miracles such as the Resurrection? To understand miracles we must first understand ‘normal’ events. For scientists, normal events are described by theories and laws. Laws are well established theories which have survived many tests. Laws therefore describe the past: they do not prescribe the future (ie, predict what must happen in the future) but they do raise our expectations to a very high degree. For example, we would be astonished if a predicted solar eclipse did not occur.

What is the Christian view of normal events? A few years ago one of the Christmas cards I received had on the front a picture of a chef holding in his outstretched hands a giant spherical Christmas pudding. Underneath the sender had written his own caption, the first line of a famous Negro spiritual ‘He holds the whole world in his hands’. It was a brilliant analogy. The chef was outside of, and distinct from, his pudding, yet the creative genius of the chef was within each morsel. The chef was upholding the pudding. He could be said to have created the pudding in a few hours, yet the ingredients had taken much longer to develop.

The analogy of course is obvious. God is both the creator and the upholder of the universe. Paul writing to the Colossians says ‘All things were created by him [Christ] and for him. He is before all things and in him all things hold together’ (Colossians 1:16, 17). When Paul spoke to a non-Christian audience in Athens he said, ‘He gives life and breath and all things to all men. In him we live and move and exist’ (Acts 17:28). The message is clear: Christ continually sustains and upholds the universe, including mankind.

The consistency of God

Ringing through the pages of the Bible is the message that God is consistent and not capricious. For example, ‘summer and winter, seedtime and harvest shall not fail’ (Genesis 8:22), or ‘Jesus Christ, the same yesterday, today and forever’ (Hebrews 13:8).

Scientists who are Christians believe that because God is consistent, therefore the universe is consistent, and hence it can be described by theories and laws. However, this raises a major problem concerning miracles. If at least some miracles are real events, how can this be reconciled with not only our scientific belief in an orderly universe but also with our Christian belief in a God who is consistent and not capricious? It is helpful to consider some specific miracles to see how this problem can be resolved.

Joshua 3:15 records, ‘As soon as the priests reached the Jordan the water from upstream stopped flowing. It piled up in a heap a great distance away at a town called Adam, while the water flowing down to the Dead Sea was completely cut off. Joshua then records that about 40,000 Israelites crossed over.

The Bible consists of various types of writing: history, poetry, parables etc. When considering miracles we must seriously ask the question whether the author intended his account to be understood as history or not. This is not always easy to decide; however it seems to me that the above description in Joshua is meant to be understood as an historical event.

As a Christian I believe that God is all-powerful and can do anything. However I also believe that he will not do anything that is against his character. Since God is a consistent God I believe it is right always to look for a consistent, not a capricious, explanation of miracles. I therefore believe that we should always look first for an understanding of miracles in terms of scientific mechanisms, although I realise that not all miracles can be explained in this way (see later), at least not with our current scientific understanding.

Returning to the ‘crossing the Jordan’ miracle, in 1979 Amos Nur, a geophysicist at Stanford University, studied in detail historical earthquakes on the Jericho fault. He found that in 1927 there was an earthquake which caused mud slides along the River Jordan at a place called Damia, about 40km north of Jericho. These mud slides temporarily cut-off the flow of the river Jordan. Nur then found that Damia used to be called Adam, the place described in Joshua as being where the river Jordan was stopped, and he also found records of other occasions when an earthquake had caused mud slides that had stopped the river Jordan in this way. He states, ‘Adam is now Damia, the site of the1927 mud slides which cut off the flow of the Jordan. Such cut offs, typically lasting one to two days, have also been recorded in 1906, 1834, 1546, 1534, 1267 and 1160’. Nur adds that the description of the stoppage of the Jordan in Joshua 3:15 is so typical of earthquakes in this region that little doubt can be left of the reality of this event in Joshua’s time.

God is all-powerful and therefore stopping the flow of the Jordan could have been a special supernatural intervention of God. However the key question to ask is not ‘what could God do?’ but ‘what did God do?’ Was stopping the Jordan a special intervention of God or was it due to a natural mechanism? We have seen that there is clear historical evidence of the Jordan being stopped by earthquake-produced mud slides many times in the past at precisely the place, Adam, specified in the book of Joshua. There is strong evidence therefore that an earthquake was the natural mechanism which stopped the Jordan in the time of Joshua. Does this mechanistic explanation mean that the event was not a miracle? No: it was still a miracle, but a miracle of timing. At precisely the time when Joshua and 40,000 Israelites needed to cross the Jordan an earthquake occurred causing mud-slides which blocked the river’s flow. God upholds the universe with perfect timing. Many ‘miracles’ happen today through natural mechanisms. For example, materials scientists provide artificial hips that enable the lame to walk, surgeons perform cataract operations that enable the blind to see. Just because we can understand scientifically these modern healing methods does not make them any less the hand of God.

Are all miracles ‘miracles of timing’ explicable in terms of Natural mechanisms? I believe that many are, but others, for example the healing miracles performed by Jesus and his Resurrection, we cannot explain by natural mechanisms (at least not with our present scientific knowledge). In these cases God appears to be operating differently from usual, but how can this be if God is consistent and not capricious?

Imagine standing behind a pianist as he plays the piano from memory. If his fingers normally land on the white keys, but every time he goes to play an F he plays the black F sharp instead you can deduce the key signature (G major) of the composition. The key signature is at the start of the musical score and it is the rule given by the composer for playing his music. God, the Master Composer of the universe, has established its key signature. We do not have the score of the universe, but by careful observation scientists can establish the rules by which it operates: we call these rules the laws of nature (of course we may be wrong about some of these).

A musical composer is not bound by his own rules. He is free to decide that at a particular place in the music he wants an additional sharp or flat; these local deviations from the key signature rules are called accidentals. With a great composer these accidentals are never capricious, they are always carefully placed and consistent with what the composer wants to achieve. They make sweeter music. (Try playing a Beethoven sonata as written and then without the accidentals.) Similarly God is not bound by the rules he has established for the universe. He is free to uphold it moment by moment in any way he chooses. However he is a consistent God, and therefore any ‘local accidental’, any change in his method of upholding, must be consistent with what he wants to achieve. It cannot be capricious, it must make sweeter music, it must be consistent with the overall purpose of God.

Jesus, the son of God, had perfect love. It made more sense, not less sense, for him to heal the sick. It was totally consistent with his character. In Peter’s first sermon, at Pentecost, he states that God raised Jesus from the dead ‘because it was impossible for death to keep its hold on him’ (Acts 2:24). Peter saw the Resurrection as being inevitable, not incredible. If Jesus really was the Son of God then death could not hold him. The Resurrection fully accords with God being consistent not capricious, and was planned by God before the creation of the universe.

Many people think of miracles as interventions of God, and people often pray for God to intervene in the world. While this may be a convenient way to think from our point of view, the notion of God intervening is inconsistent with the biblical picture of God upholding the universe moment by moment. God is not a passive God who sometimes intervenes: God is always active. On rare occasions he chooses to act differently from usual. On less rare occasions events occur which to us seem to be astonishing coincidences of timing. Both these types of events we usually refer to as miracles. Both are equally the hand of God.

This post is a series of excerpts from Sir Colin Humphrey’s chapter in the book Real Science, Real Faith (Monarch, 1991), reproduced online by permission of the publisher. You can read the full chapter here.