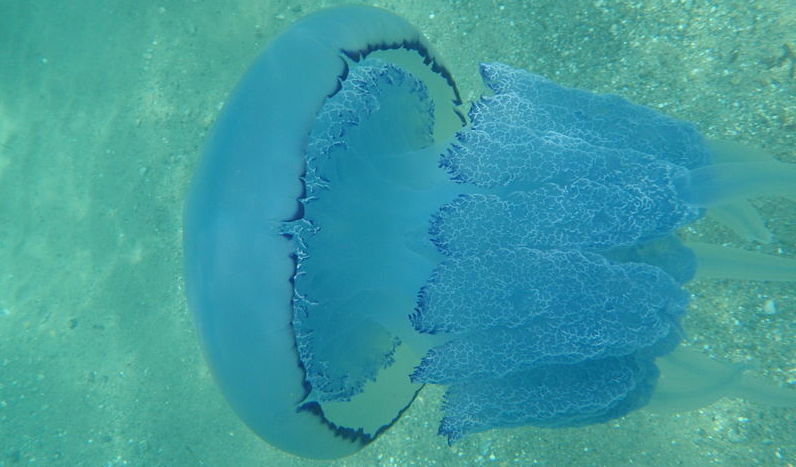 How can faith and ecology work together? Dr Robert (Bob) Sluka, a marine biologist who works for the Christian conservation organisation A Rocha, has given a lot of thought to this question. In today’s guest post he shares his thoughts on integrating the Bible and science, prompted by a family day at the beach.

A few weeks ago our family spent the weekend at the seaside. The beach, in England, in January, is not the most inviting place. However, we were all needing to see the ocean and indeed half our family ultimately heeded its siren call to jump in. A steaming plate or two of chips helped restore warmth, especially for my 11 year-old daughter who tumbled in after a wave knocked her over, fully clothed.

Along with other intrepid explorers, we walked the beaches of Studland Bay in Dorset, enjoying the dunes and heather. Our kids found a remote spot to call their own and played for hours, only being torn back to ‘civilisation’ by darkness and the long drive back to Oxfordshire. 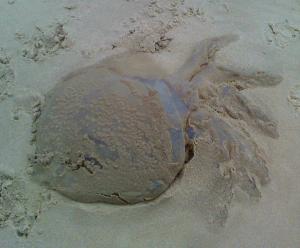 One of our discoveries was a jellyfish washed up on the beach. I later tried to identify it and think it was a barrel jellyfish. On land it looks like a blob of jelly, but in the water it is another thing all together. The rhythmic pulsing of its bell and the dramatic brightly coloured tentacles are a thing of beauty and mesmerizing to watch. Though I haven’t seen this species in the water, I have encountered many others similar to it.

Jellyfish are related to corals and sea anemones, and swim through the world’s oceans collecting food with their long tentacles. If you have ever been stung while swimming, you know that these animals can pack quite a punch. How would you like to eat one?

Callum Roberts, Professor in the Environment department at York University, writes in his book The Unnatural History of the Sea about a future world in which jellyfish sticks figure prominently. We are fishing too effectively, and as larger and frankly tastier animals disappear, the humble jellyfish seems to be doing quite well. I reported my find to the Marine Conservation Society’s Jellyfish Survey website, which tracks sightings of these creatures around the UK in order to understand global and national patterns of change. 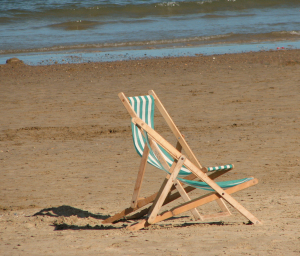 There is quite a history of marine naturalism in the UK. I was very moved by a biography of one of Victorian England’s leading marine biologists, Philip Henry Gosse. His name may be familiar to some as the demanding Father in the book Father and Son. As you might expect, his biographer suggests that he was much more complicated than he has been portrayed in that book.

Gosse popularised the aquarium, and made one of the first attempts at a comprehensive species list of British marine animals. Sadly, his efforts seemed to have resulted in over-collection and a notable decline of certain species in particularly popular areas.

I was especially intrigued by Gosse’s attempt to integrate his faith and science, which Denis Alexander captures in his review of Gosse’s biography (Science & Christian Belief, Oct 2004). “The picture that emerges is of a great enthusiast for natural history who inspired generations of Victorian households to explore the biological diversity around them, bringing it right into their homes, in collections and in aquaria. These ‘glimpses of the wonderful’ were all part and parcel of the wisdom of God in creation. Gosse never separated his science from his faith, and even though his attempts at integration may have been at times misplaced, the priority he gave to the kingdom of God in his scientific career, as much as in his family life, continues to challenge.”

I am sure I have at times tried too hard to integrate marine biology and faith and come up with something that will be judged as wanting in the future. But I hope that as I seek to deliberately hold the word of God in one hand and my diving fins in the other, that I can inspire a new generation of Christians to love the ocean in the way that God does, and to ‘seek first his kingdom’ (Matthew 6) not only for the land and its people, but also for the ocean. I leave you with Gosse’s words “I cannot look at the Bible with one eye, and at Nature with the other, I must take them together.”

To read more about Bob’s work and faith, and the importance of wonder in both science and Christianity, see God in the Lab: How Science Enhances Faith (Monarch, 2015).