Guest Post: The Creator of the Seas and all that is in them 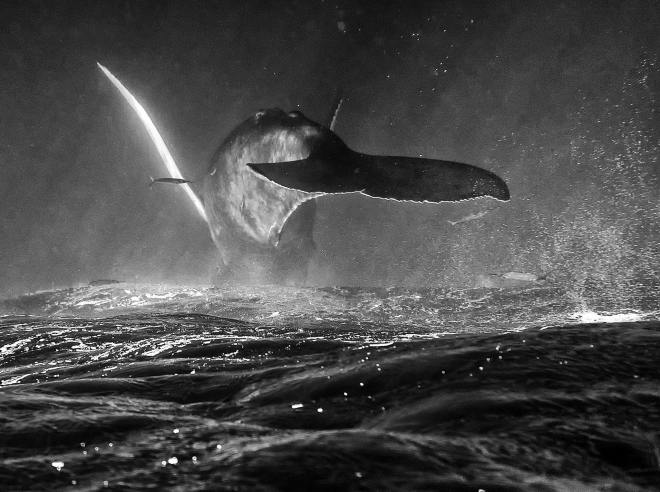 It is easy to forget that we human beings are not the be all and end all of God’s magnificent creation. From one perspective we are simply creatures in it. From another perspective we are unique in his creation in being made in the image of God (Gen. 1:27). However, both the beauty and abundance of marine life and the biblical passages concerned with the sea show that the oceans and the life in them are of intrinsic value to the creator. Perhaps the best passage illustrating this is from Psalm 104.

There is the sea, vast and spacious,
teeming with creatures beyond number – living things both large and small.

There the ships go to and fro,
and Leviathan, which you formed to frolic there.

All creatures look to you
to give them their food at the proper time.

When you give it to them, they gather it up;
when you open your hand, they are satisfied with good things.

When you hide your face, they are terrified;
when you take away their breath,
they die and return to the dust.

When you send your Spirit,
they are created,
and you renew the face of the ground. 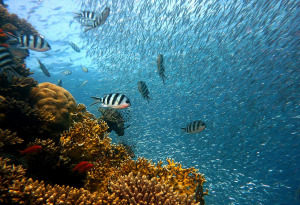 This psalm illuminates the idea of the diversity and wise creation of God’s own creatures by reference to the sea, which teems with innumerable and varied life, ‘living things both small and great’.

The Bible contains traditions that present Leviathan, a great sea creature or ‘dragon’, as the enemy of God’s people and as inimical to God’s wise order in creation. This psalm then presents an extraordinarily divergent perspective. Far from being threatening to the created order, Leviathan has deliberately been placed in the sea as part of that order, in accordance with God’s wise plan.

From God’s perspective, Leviathan is not a terrifying beast, but an innocent playful creature, made to enjoy the great, wide sea. Various English terms are used to translate the word given here in the NIV as ‘frolic’, but the important element is the idea of playfulness, celebration and enjoyment.

In Proverbs 8:30-31, wisdom is said to ‘delight’ in God’s creation, but here the frolicking Leviathan is doing the same thing. The storm-waves that highlight human vulnerability in the vast alien environment of the sea are a perfect playground for great sea creatures such as Leviathan, at home in the habitat they were created to enjoy. 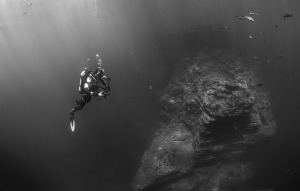 Too often people have seen themselves as the pinnacle of God’s creation. The creatures of the sea remind us that God takes delight in his creation irrespective of the presence of humans in it. For most of human history we have at best “dabbled our toes” in the great waters of the ocean, but have remained largely unaware of the beauty and complexity of the life in the ocean, which has nevertheless been a delight to its creator.

God takes pride and pleasure in aspects of creation that we may not even be aware of. As Shakespeare so eloquently put (through Hamlet’s words to Horatio): “There are more things in heaven and earth, Horatio, than are dreamt of in your philosophy.” Our human understanding and knowledge are limited and it is good to remember that! 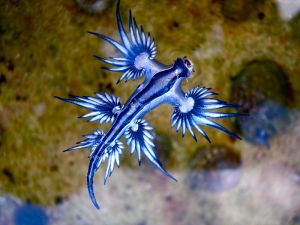 Stepping back from our own immediate concerns, we see that God as creator is much more profligate in his creating, as the abundance of life in the sea shows, and has concerns with his creation and plans for it that transcend what we can imagine. Even creatures that appear ugly or horrifying still have their place, along with other life that we can recognise as exquisitely beautiful. This puts us in our place and reminds us that our whole experience of and perspective on life may be too human-centred, too centred on terrestrial life, thus missing the grandeur of who God is and what he has created. 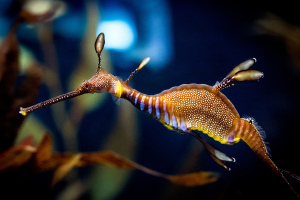 “The Earth is the Lord’s and everything in it” (Psalm 24:1), including the oceans and sea creatures, and is not ours to do with as we wish. If people claim to love God, then a degree of humility is called for in how we live on the planet we share with the rest of his creatures, from microscopic life through to blue whales. The challenge is to become aware of the richness of God’s creation, and aware that it is important to him and was not solely created for human beings to exploit. 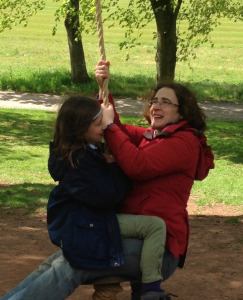 Dr Rebecca Watson is a Research Associate at the Faraday Institute, working on ‘The sea in Scripture’, conducting a study of the biblical material on the oceans in order to develop a biblical theology of the sea. The aim is to apply this to how Christians should treat the ocean, the creatures living in it and the resources it contains. Her theological studies began with a BA from Oxford University, and an MA in Theological Research from Durham, before she returned to Oxford to complete a DPhil examining putative occurrences of the theme of ‘chaos’ in the Psalter. Her first post was as a Lecturer in Biblical Studies at what is now the University of Cumbria and Senior Tutor for a ministerial training course for the north west. This was followed (after a career break) with three years working within the Cambridge Theological Federation as a Lecturer and Director of Studies for the Eastern Region Ministry Course (ERMC). She is also an affiliated lecturer of the University of Cambridge.