Guest Post: Scientists are childish (but in a good way) 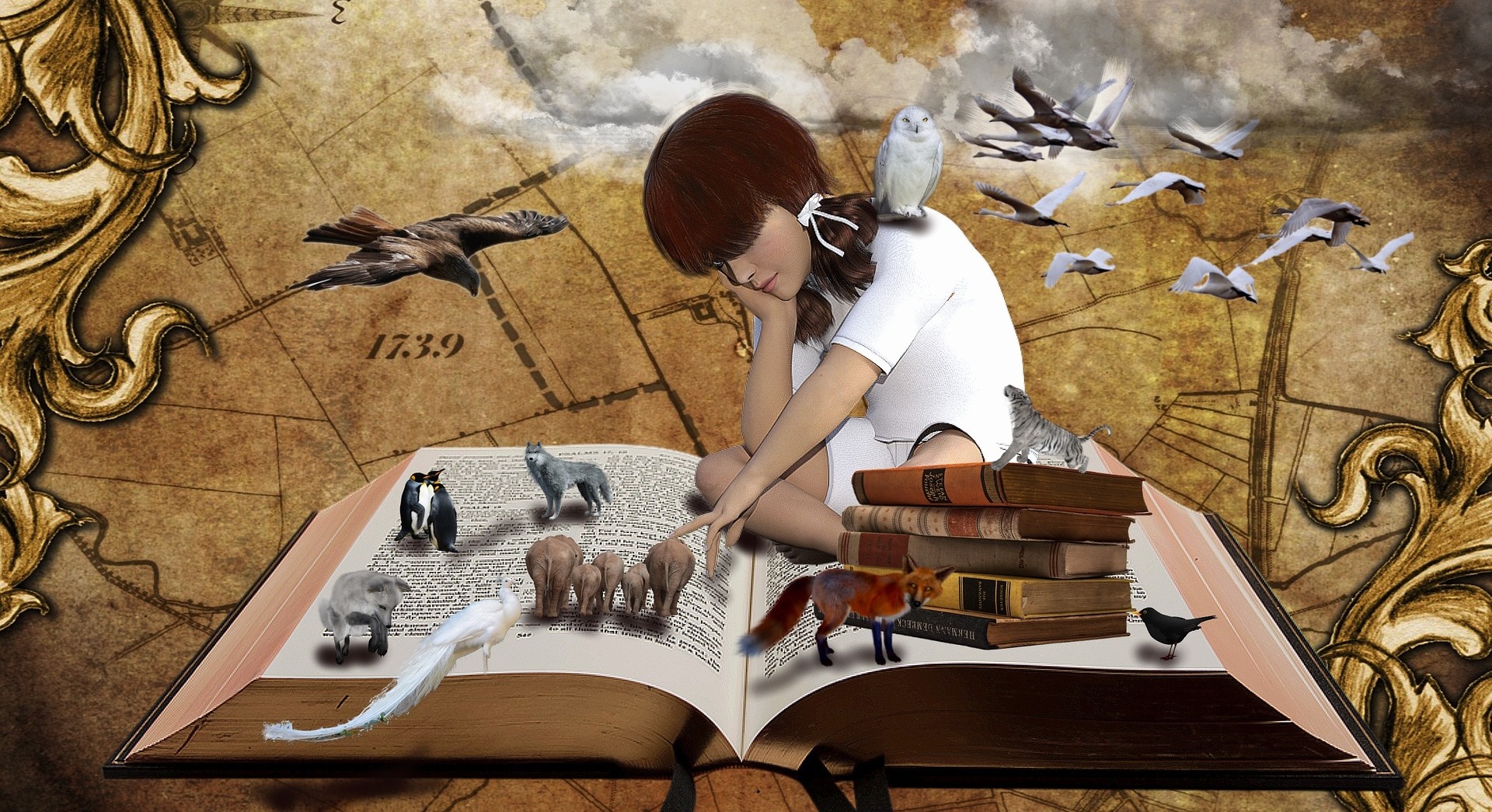 Children are delighted by living things that most adults think are icky or mundane. Last spring my daughter Lucy, now age 6, found a large earthworm and named it Cinderella. She played with it for hours. Not a week later my son Josiah, 4, caught a big brown toad in our backyard and squealed repeatedly, “He’s adorable!” (Not everyone would pick that adjective, but I agreed.) They fixate on the fish tank at the dentist’s office or our family’s ant farm, taking in every detail and pestering me with a steady stream of questions.

As a Christian, I believe it brings God glory when we take pleasure in the things he has made. In fact, I think it’s one of the (many) ways God wants us to be like little children (Matt 18:3). Unfortunately, most grown-ups forget to look around and be delighted.  We stop asking so many questions. Not scientists, though.

Scientists, from astronomers to zoologists, have a child-like obsession with observing, touching, encountering, and wondering about the natural world. They sometimes spend decades of their lives studying a single protein, or galaxy cluster, or physiological process, and never tire of their subject. They ask great questions.

When my non-scientist husband and I first started dating, I was in graduate school, and I would bring him to lab parties and events.  He soon realized that the best way to get a scientist talking was to ask, “So, what protein do you work on?” Even if they didn’t work on a protein, they would recognize the invitation to geek out over their area of interest. They are not self-conscious at all about this. They are childlike. They are persistent in their work, because they have questions: There’s something just beyond the horizon of human understanding that they want to understand. Is it this? Could it be that? What happens if we poke here?

My area of interest in graduate school was the cytoskeleton, a messy network of microscopic filaments that gives cells their structure. Like the three little bears, these filaments come in three sizes: actin (the baby), intermediate filaments (the mama), and microtubules (the papa). While I dabbled with actin, I was captivated by microtubules. 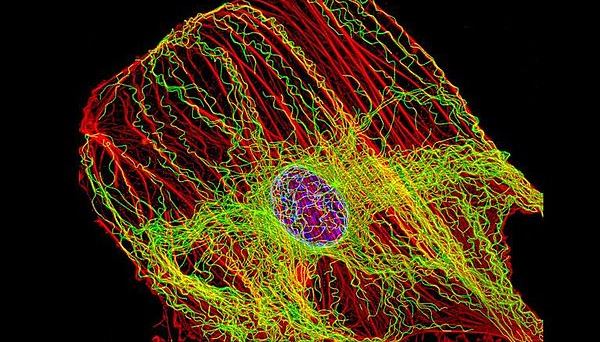 Microtubules are long, hollow cylinders made of protein subunits. They are constantly on the move, growing and shrinking under the influence of molecular cues, like a dog sniffing out the trail of a squirrel.

In a dividing cell, after the DNA has been duplicated, microtubules organize into two teams on opposite sides of the cell for a game of tug-of-war: the microtubules on each side lasso the DNA-containing chromosome pairs and pull back and forth, until the pairs separate and each team has a complete set of DNA. Everybody wins! It is a beautiful dance.

In a resting cell, microtubules look a bit like the undulating arms of an octopus; they emanate outward from the cell’s center, growing and shrinking in a randomized pattern, exploring the periphery of the cell. Molecular motors walk along microtubules, ferry cargo back and forth.

I was drawn to math and computer science (and a lifestyle that didn’t require coming into the lab at inconvenient times to check on my cells), so I chose to do my PhD research in a lab that specialized in computational methods of studying cells.

My wet-lab colleagues across the hall would grow cells in which microtubules were labeled with a fluorescent probe. They would then take movies of living cells under the microscope. Because it was known that microtubule behavior was critical for a lot of activities in the cell, biologists at that time painstakingly tracked them manually, frame-by-frame, getting a few dozen microtubule trajectories over a couple of weeks’ time.

My job was to make a computer do, with a few clicks of the mouse, what would take a researcher months to accomplish. The software I developed extracts hundreds or thousands of trajectories in just a few seconds (see Movie 10 (download, 7.8MB) for an example). This advance enabled more sophisticated kinds of experiments.

I was in graduate school for 5.5 years, and I spent about 4 of them staring at movies of microtubules in living cells. I never called them adorable, but I did marvel at them every day. It still blows my mind that the behavior of individual microtubules is stochastic, or random, yet their collective behavior contributes to highly orchestrated events like cell division. There is no commanding officer telling microtubules where to march, though molecular messages and feedback loops deliver directional cues. Microtubules and many other protein complexes self-assemble and accomplish the basic functions of life. In each of the trillions of cells in our bodies. Every day.

This self-organizing effect also happens at the level of organisms. Without anybody shouting, “turn left now!” a flock of starlings or a school of fish can change directions on a dime. Without instructions, worker bees produce an exquisite pattern of hexagonal cells in honeycomb. (The queen is too busy having babies to tell them what to do.) Ants efficiently find food by wandering in random directions and depositing pheromones along their way; fruitful paths are reinforced with more pheromones, while unfruitful paths dissipate. Nobody yells, “Banana peel, over here!”

Is there somebody behind the curtain, pulling the puppet strings in all of these cases?  No, I don’t think God is a micromanager, pushing microtubules and ants into position at every moment. But neither do I believe creation is a vast cosmic machine, ticking along independently of God. Creation is robust and responsive; it knows and obeys the Creator’s voice, though we—like children—have selective hearing. (Disobedience is decidedly not one of the ways in which we are to be like little children!)

Staring at microtubules makes me wonder: how exactly does God interact with and sustain the world he has made? How does he grant agency and freedom to created things, and yet accomplish his sovereign plans and purposes for the universe? Does God number every microtubule like the hairs on our heads? Were the microtubules in Jesus’ resurrected body the same as ours? Will our glorified bodies be made of cells, and will some of them die, as they do in our bodies millions of times every day? If they do, what implications does that have for our understanding of life and death and goodness and evil?  These are some of my child-like questions.

Most scientists, at least those at elite research universities, aren’t Christians. They aren’t asking these particular kinds of questions. But many of them consider themselves to be spiritual, and their spiritual intuitions are rooted in wonder and the praiseworthiness of this beautiful old world we live in. They may not know it, but as they struggle through long days and failed experiments, scientists all over the world “image” God. Their delight in the created order—and their many, many questions—bring him glory. 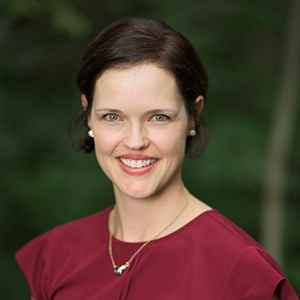 Kathryn Applegate has degrees in biophysics and mathematics, and a Ph.D. in computational cell biology from The Scripps Research Institute, La Jolla, California. As the Resources Editor at BioLogos, Kathryn works with scholars and educators to develop new web and print resources. From 2010-2016 she served as Program Director at BioLogos, managing the BioLogos Evolution & Christian Faith grants program among other activities. Kathryn co-edited (with Jim Stump) How I Changed My Mind About Evolution (InterVarsity Press, 2016).  She is a member of the BioLogos Voices speakers bureau. Kathryn enjoys an active involvement in both the science and faith community and in her church. She and her husband Brent have two young children and enjoy exploring the state parks of Michigan together on the weekend. Their dream is to move to Cambridge, England, and hang out with Ruth Bancewicz and the Faraday team for a year, but will likely have to be content with British dramas on Netflix.