On the outskirts of the city of Rome, you will find networks of tunnels dug nearly 70 feet underground. If you have the courage to descend the stone stairs, you will find something even more surprising: some of the first recognisably Christian burial sites in the world. In these catacombs, Christians of the first several centuries buried their dead. The Roman persecutions meant the Christians needed secretive places for burials; only then could they avoid desecration. But the most surprising thing about these ancient tombs is that they also bear some of the oldest extant Christian art in the world. And, rather than the gloomy paintings one might expect in an underground tomb, these works of art resonate with themes of hope and of life regained. A common image is that of Christ as the Good Shepherd, carrying one of his sheep through the dangers of death. Other scenes include Jonah and the Whale and the Last Supper (with its overtones of the hoped-for Wedding Supper of the Lamb at the end of days). 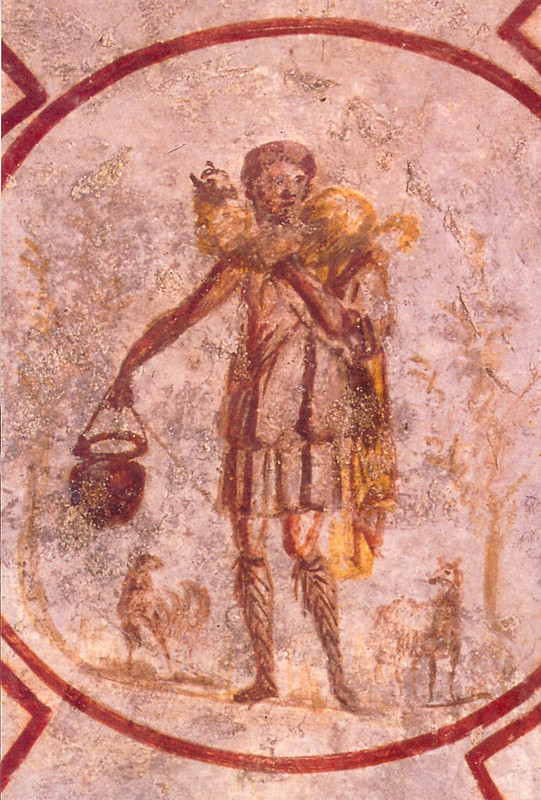 Two things are remarkable about these early Christians’ attitude toward death. First, there seems to be a confidence in the reality of bodily resurrection. This is implicit in the care they took in burying their loved ones, and it is explicit in the writings of the earliest Christian apologists. Second, these Christians clearly had a remarkable sense of hope even as they occupied the position of an ostracised (and indeed persecuted) religious minority. Their hope is clear from the poignantly expectant scenes they depicted on their underground mausoleums. These early Christians believed Jesus had risen bodily, so that we might return to life as well. Such a confidence was virtually absent from the surrounding Greco-Roman culture that mocked the very idea of resurrection.

The possibility of resurrection

This pagan scorn for resurrection is something which modern readers will understand. After all, there are puzzles about the very possibility of resurrection. How can even God bring the dead back to life? This question was apparently being asked by Paul’s First Century audience in Corinth. This question is arguably even more pressing in light of the philosophical paradigms which came to dominate in the 20th Century. It is commonly thought that the human person is a purely material or physical entity (a position sometimes called ‘materialism’) which goes out of existence at death. Although materialism is a philosophical position, it is often thought to be straightforwardly confirmed by science. If materialism is true – if there is no non-material part of us – how can we be resurrected?

Making a case for the possibility of resurrection is well beyond the scope of this post, but there are a few important points to make here. First of all, philosophers of all stripes remain engaged in vigorous debate about whether materialism is true. Although materialism of some kind is probably a majority position amongst philosophers, it faces several problems. One of these is that (due to developments in 19th and 20th Century physics) it is not clear that matteris what physics ultimately studies. Physics seems to study and to propose very different entities than materialist philosophers historically had in mind. These more recently-proposed entities include electromagnetic fields and space-time. To say that all that exists is matter in motion seems (at the very least) to oversimplify and mislead.

Second, there are prominent philosophical arguments that lead away from materialism. One of these involves a thought experiment. Imagine there is another world constructed just as ours is. There are planets, oak trees, automobiles, and human beings. These are all composed (physically speaking) just as they are in our world. However, there is in this imaginary world no experience of consciousness. The human beings there appear (on the outside) to be conscious; but they are simply cleverly-designed automata. If you can even conceive of such a world, then consciousness or mind is not necessarily reducible to the physical entities in which it inheres. Now, this argument is controversial. But the point here is simply that we should not assume that materialism is true by definition or by default. There is scope for affirming that the mind is not reducible to the body that dies and decays. If there is some non-physical element of the person, then life after death does not seem to be impossible.

Third, the future resurrection has historically been affirmed as a divine miracle – an event which depends upon God’s omnipotence (or unlimited power). When we take this into account, even materialism may not be incompatible with a personal afterlife. After all, omnipotence extends to all logical possibilities. Perhaps we do not know how God can return a human person to life after death, but that does not mean that God does not know how to do so. If one accepts that God has revealed that ‘a time is coming when all who are in their graves will hear his voice and come out’ (John 5.28), then it can remain reasonable to accept such a proposition in hopeful anticipation.

Jon Thomson has a PhD in Philosophy from King’s College London, where he was supervised by Professor Rosa Antognazza and Dr Jasper Reid. He is now a Postdoctoral Research Associate at The Faraday Institute at Cambridge, on a three-year project entitled “Re-embodying the soul’: The possibility and desirability of a personal afterlife’. This project will contribute to the philosophical debate about the possibility of an afterlife. His doctoral research was focused on theories of personal and bodily identity in the seventeenth century. Outside his work in the history of philosophy, he has published on contemporary issues in philosophy of mind and philosophy of religion.