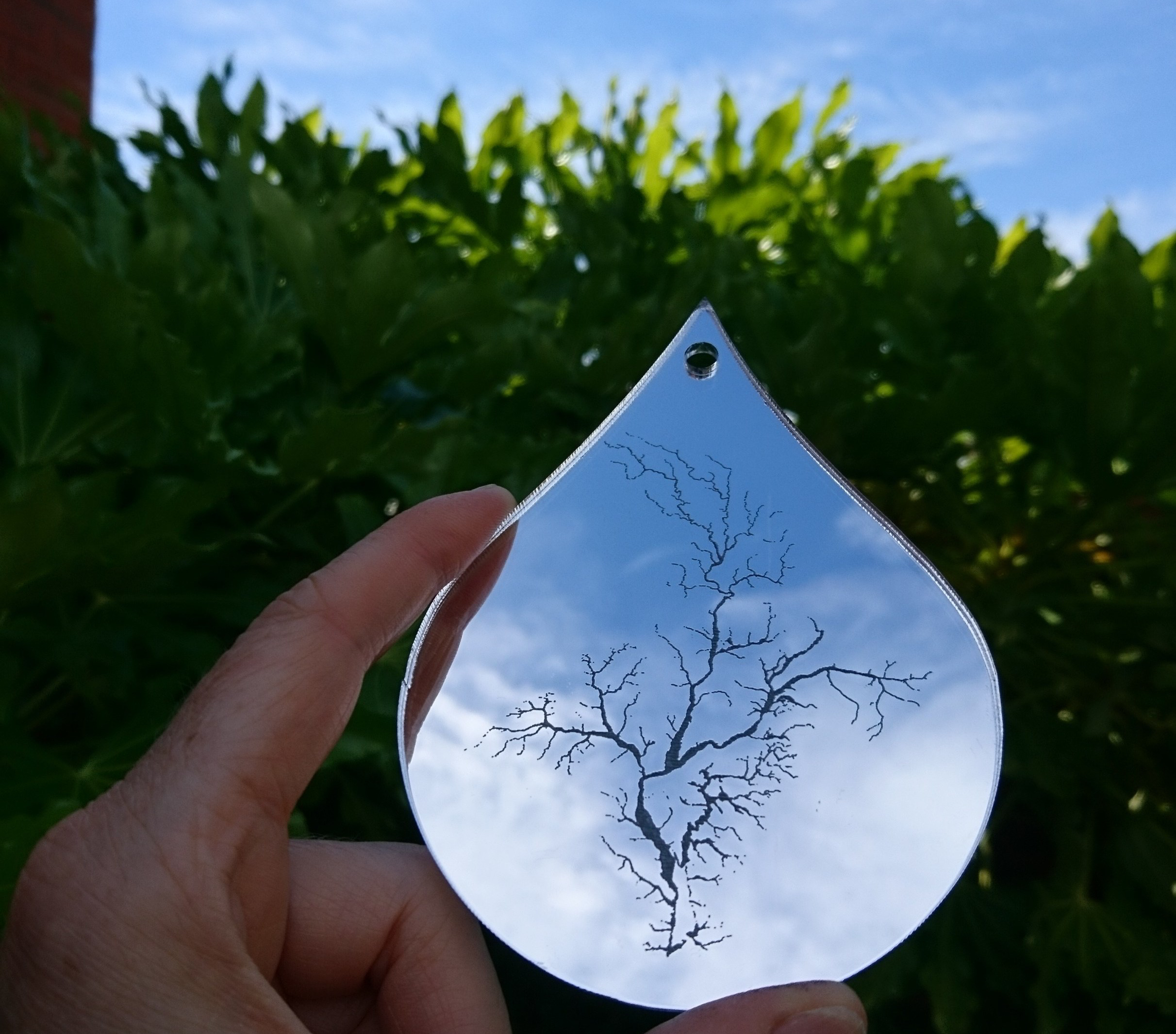 Let the waters under heaven be gathered into one place and let dry land appear.

Lining the upper sides of Exeter Cathedral Chapter House there are two sets of sculptures. The theme is Creation, drawing inspiration from the Old Testament on one side, and the New Testament on the other. The above quotation from Genesis captions the sculpture representing the creation of “Earth and Water”.

In the summer of 2017 I exhibited the artwork “Green|Blue” in the Chapter House. Below “Earth and Water” hung representations of five river catchments around the south coast. They are part of a series of 21 images, from the Sussex Ouse to the Bristol Avon, that seek to challenge humanity’s tendency to take a God’s eye view of the world.

The view from above has become normalised. Satnavs and Ordnance Survey Maps, city centre plans and ‘you are here’ stickers on the boards at local nature reserves, Geographic Information Systems (GIS) and OpenStreetMap, give the impression of omniscience and omnipotence.

“Green|Blue” uses GIS to visualise the Environment Agency dataset on Risk of Flooding from Rivers and Sea, as published in March 2015. According to the entry on data.gov.uk: “This is a national assessment of flood risk for England produced using local expertise. The dataset shows the chance of flooding from rivers and/or the sea, based on cells of 50m. Each cell is allocated one of four flood risk categories, taking into account flood defences and their condition.” The data are © Environment Agency, and are freely available for download.

For each of the 21 river catchment areas, I aggregated the risk categories and coloured the land at risk, then oriented the images so they appeared as ‘trees’. So far so prosaic. What emerged was a beautiful, sometimes fragile, sometimes twisted, and very varied forest.

Nature has an exquisite economy with pattern. The hexagon appears in snowflakes, honeycombs, and the basalt columns of the Giant’s Causeway; the spiral in sunflowers, tropical cyclones, and galaxies. The fractal river systems of “Green|Blue” resemble trees ranging from whip to stump, hawthorn to oak. But they are also kindred to the root systems, coral, kelp, lightning, cracks, blood vessels, and neurons.

The images reflect the geology and geography of the surrounding area. Every river is a little world with its own personality and character. In Cornwall, the rivers cut deep, and there is little land at risk. Hence the trees for the Fal, Fowey, and Camel catchments are spindly and fragile. In the low-lying parts of Somerset, on the other hand, the trees appear very solid. This of course reflects the high risk of flooding along the Parrett, Axe and Brue. So what seems to be the most solid and robust is in reality the most fragile and vulnerable.

Instead of the view from above, then, “Green|Blue” is about changing the perspective, looking slant, and embracing a new understanding and humility. It provokes reflection on juxtapositions of map-reality, nature-engineering, and beauty-threat.

The very notion of ‘flood risk’ calls both our knowledge and power into question in the face of uncertainty and the force of nature. We try to tame flooding by assembling information about flood risk from computer models and on the ground. Because it then appears predictable, we can adapt and can build defences against it. But the mastery conferred by numbers and maps is illusory. When we pour concrete and steel into flood defences and build behind them on flood plains, we are in effect creating and heightening flood risk.

I used several different techniques to make “Green|Blue”. For the series below “Earth and Water” in the Chapter House, I used the dye sublimation and hot press technique to print the images onto delicate chiffon fabric, and made the hanging from eyelets, ball chain and connectors, and perforated steel strips. Highly engineered and yet fragile.

In another piece, separately titled “Drop Slow Tears”, the tree images are incised into tear-shaped mirrors. Here I used a laser cutter to cut and etch mirror-backed acryclic. For me, they represent sorrow over past natural disasters and the cost to land, life and livelihood; the mental health struggles of those who live today with ugly engineering works and flood risk hanging over them; and future uncertainty over a range of environmental issues. 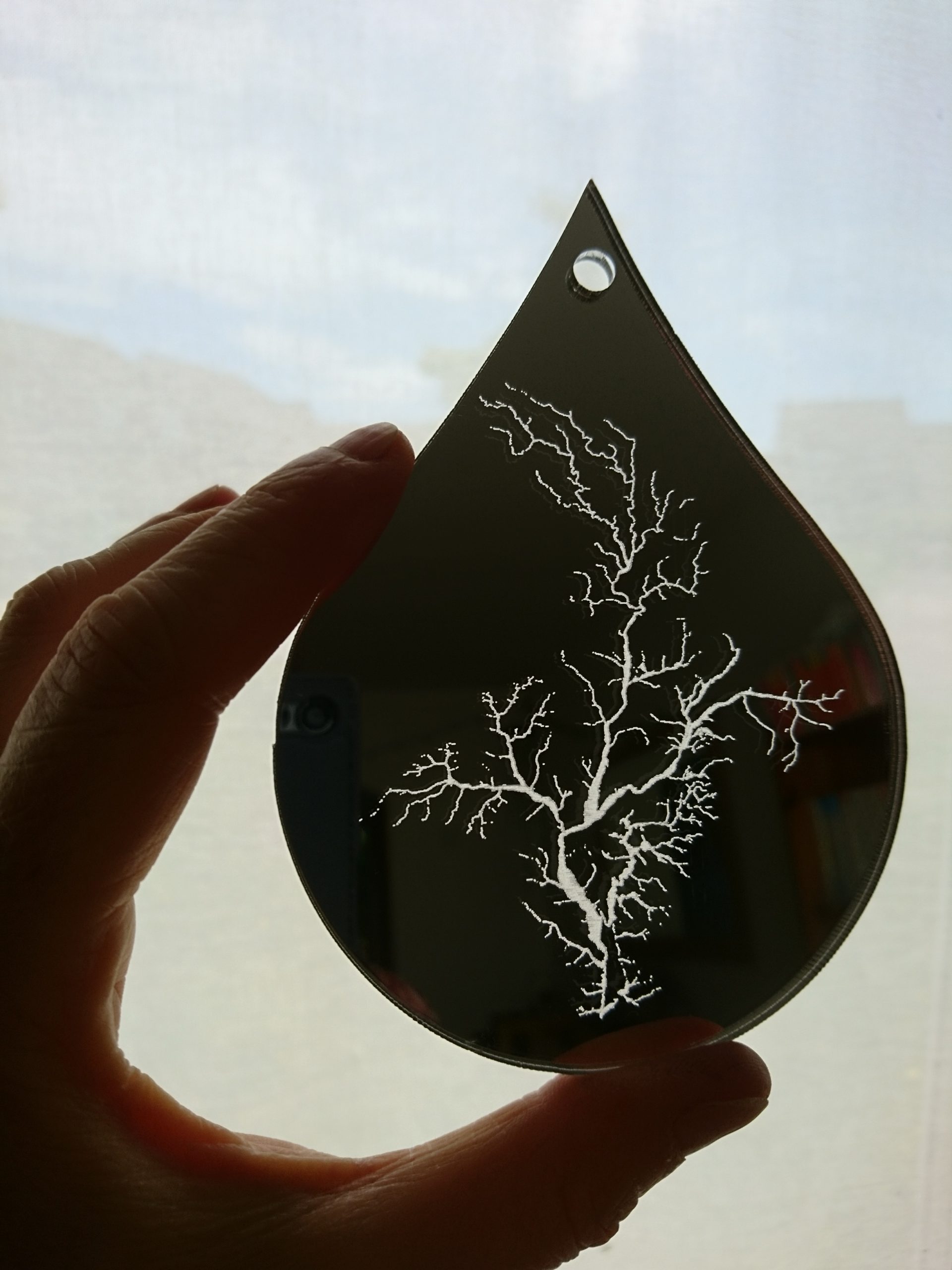 Letting go of our illusions is a process that requires grieving. In effect, we need to ‘grieve the future’.

In “The Prophetic Imagination”, Walter Brueggemann describes the ‘royal consciousness’ first of Pharaoh and later of the kings of Israel and Judah: the dominant culture which denies the reality of change, endings and death; characterised by affluence, satiation, numbness, stasis, self-preservation, and oppression. Sounds familiar?

The role of the prophet, then and now, is first to become aware, and then to imagine the alternative: “In this environment, the task of the prophet is not initially to lead a movement toward social renewal, but to lead the people in creative, artistic, public lament.”

Lament and grief pierces through the numbness. Compassion for pain and suffering, of others’ and also of our own, brings us up short. Because change and death are real, only those who live through grief are able to move on into new beginnings: “Blessed are those who mourn, for they shall be comforted.” Conversely, those who do not face the endings are not able to see and embrace the new beginnings.

So ‘grieving the future’ is about shining a light on the reality of the impossibility of infinite economic growth on a finite planet; the reality of climate change; the reality that we are not in control of nature, and nor are we stewards, but rather part of and stewarded by nature.Butthere is also the possibility of something new, different, and creative, if we use our imagination. 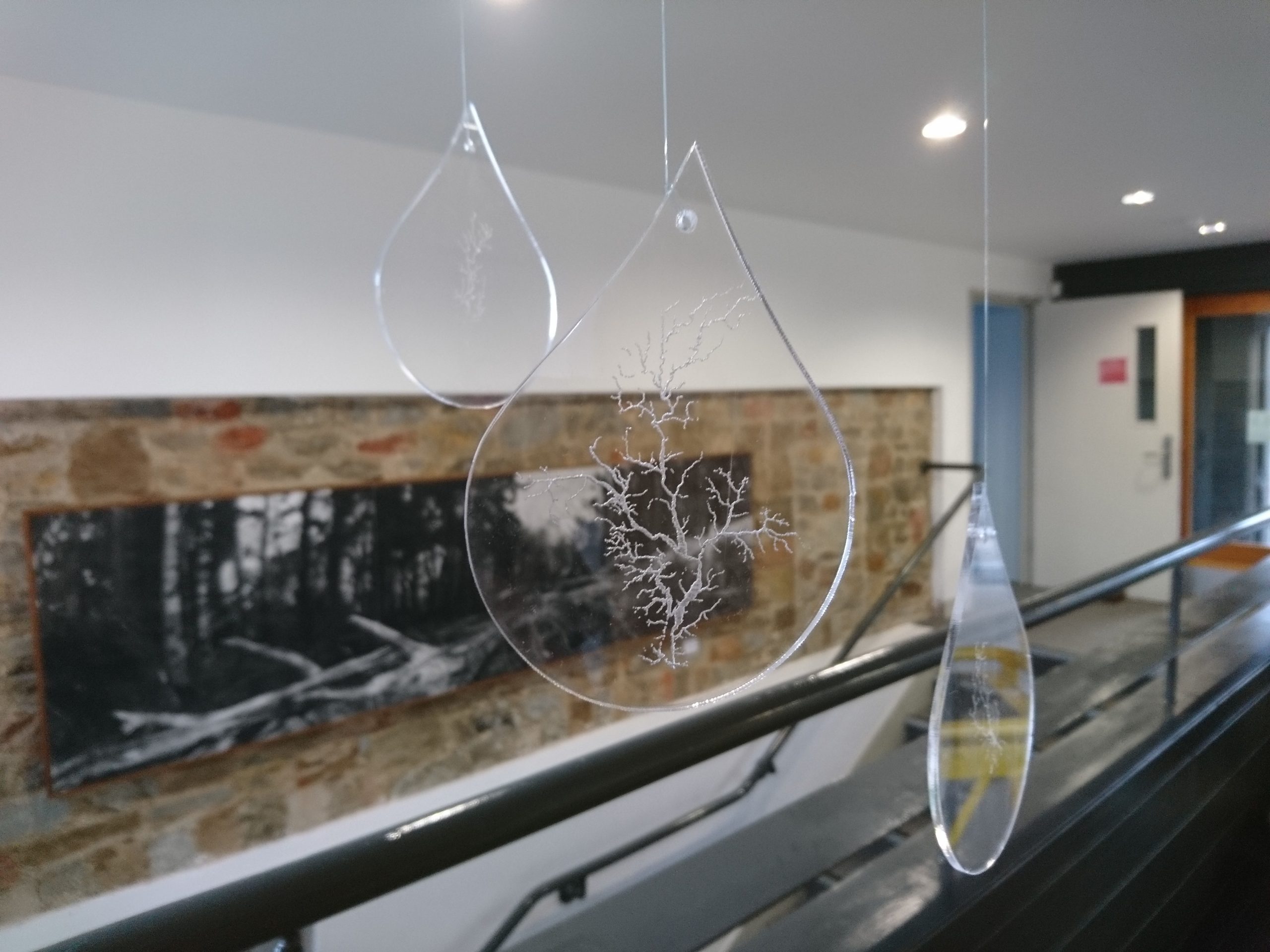 As children we found it easy to cry, play, and imagine. We had an innate sense of wonder. We still do. “Green|Blue” channels a joyful playing with data, wonder at the beauty that can be found in unexpected places, and concern for the environment and the way we see our place within it.

Clare Bryden is an artist, writer and freelance website developer based in Exeter. Her interests are primarily in how human beings affect and are affected by the natural world of which we are part, and the related theology and psychology of connectedness. Her creative practice springs from her desire to communicate environmental and social issues, her need for hope and energy in keeping on keeping on, and her habit of making connections and finding patterns. Find her at clarebryden.co.uk.