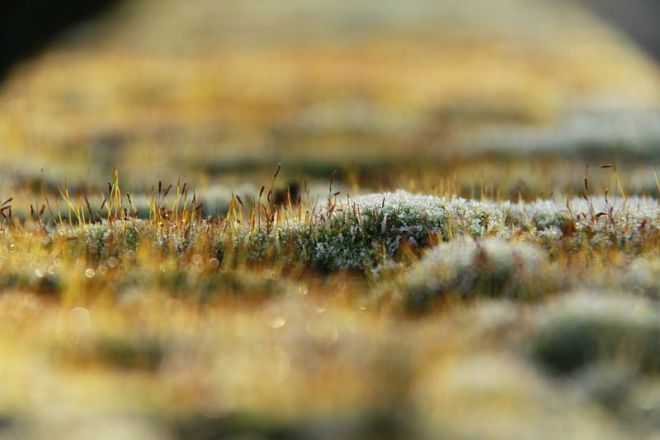 When I started my Masters course in Species Identification and Survey Skills, I wasn’t the only one in my class to think the ‘Vegetation Survey and Assessment’ module probably wouldn’t be my favourite. I’ve always had an appreciation of plants, and enjoyed my undergraduate second year plants module well enough; but when we’d also be identifying pretty birds and fluffy mammals, how could the plants hold a candle to them?

I hadn’t even considered that among the ‘lower plants’ – the mosses, liverworts and hornworts – there might be enough variety there for us to spend several weeks learning to identify them, let alone conducting a whole piece of specimen-collecting coursework on them. Moss is just moss, right?

The truth is, moss isn’t just moss. What became perhaps my favourite field guide throughout my studies was the British Bryological Society’s ‘Mosses and Liverworts of Britain and Ireland’: some 800 pages of beautiful bryophytes in stunning technicolour (surprisingly they’re not all green!)

I have my botany tutor to thank for my new-found enjoyment of the lower plants. His passion for all things botanical was utterly contagious (and, oftentimes, hilarious). One of the most wonderful things I learned about mosses is quite how drought-tolerant they are. The way to store bryophytes as specimens is in paper envelopes, in which they dry out and shrivel up into a fuzzy mess, or a crispy shred reminiscent of some ‘crispy seaweed’ you might get at a Chinese restaurant. In that state, they are almost impossible to identify – particularly when you might need to look for little nerves or hooks on the miniature leaves to distinguish between two similar species. However, when you add droplets of water onto those dried specimens and watch closely under a hand lens or microscope, the most glorious magic seems to occur. Before your eyes, the seemingly dead piece of greenery absorbs the moisture and pings back to life, ready to be examined. If only all plants recovered from water neglect so readily!

The sheer diversity of mosses and liverworts can be incredibly daunting when you’re training to identify them. By learning how to spot the major groups first, and the specific features of the species most common to our region of the UK, we quickly became familiar with many beautiful plants, each of which seemed to have its own character. 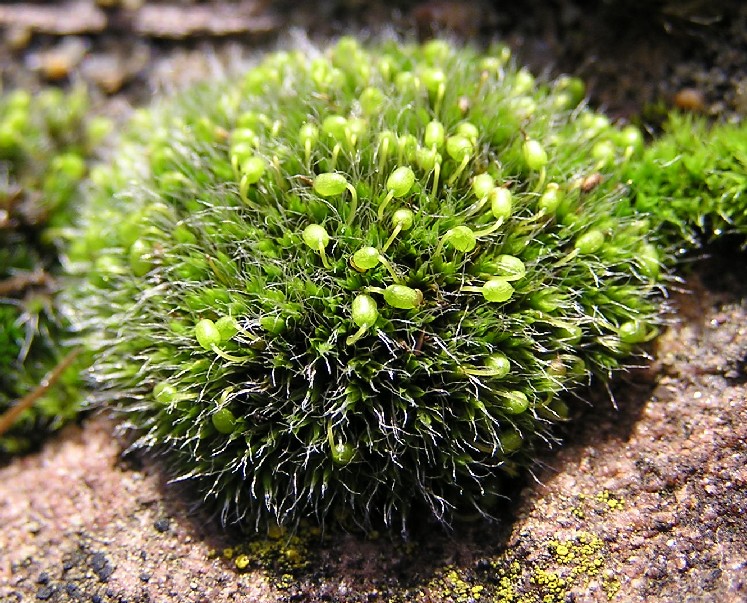 My family now tease me for stopping to admire mossy walls and boulders, and looking out for my favourite species. Of the wall-dwelling mosses, my favourite is Grimmia pulvinata. A long nerve hair extends out of every leaf, giving the little clumps of moss a grey, fuzzy look about them, as if they’re small, ageing, furry creatures. The rounded capsules – which in many species are pointed and stand erect – curl downwards and seem to snuggle back down into the fuzzy, mossy clump for comfort. It’s not unknown for me to stop and stroke them when I see them… 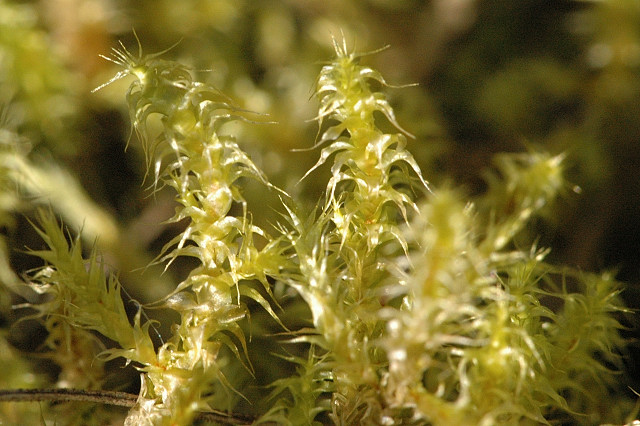 My other favourite is the helpfully named ‘springy turf moss’, Rhytidiadelphus squarrosus, which is very commonly found in lawns and makes them very springy to walk on. Their characteristic red stems are lined with almost translucent, curled back leaves, all the way up to a dainty star-shaped arrangement of shoot tips at the top.

It’s the variety of species, intricate in all their variety, that made me fall in love with these lower plants. The fact that so many of their features can only be revealed under a hand lens or microscope felt like secrets that we were being allowed to uncover as we explored. From a distance they can appear much of a much-ness, but when you realise that one rock might have twenty different species growing on it, their variety is astonishing.

The bryophytes are also a crucial indicator species for general environmental health. Knowing which species are tolerant to pollution or not allows us to track air quality levels in urban environments. 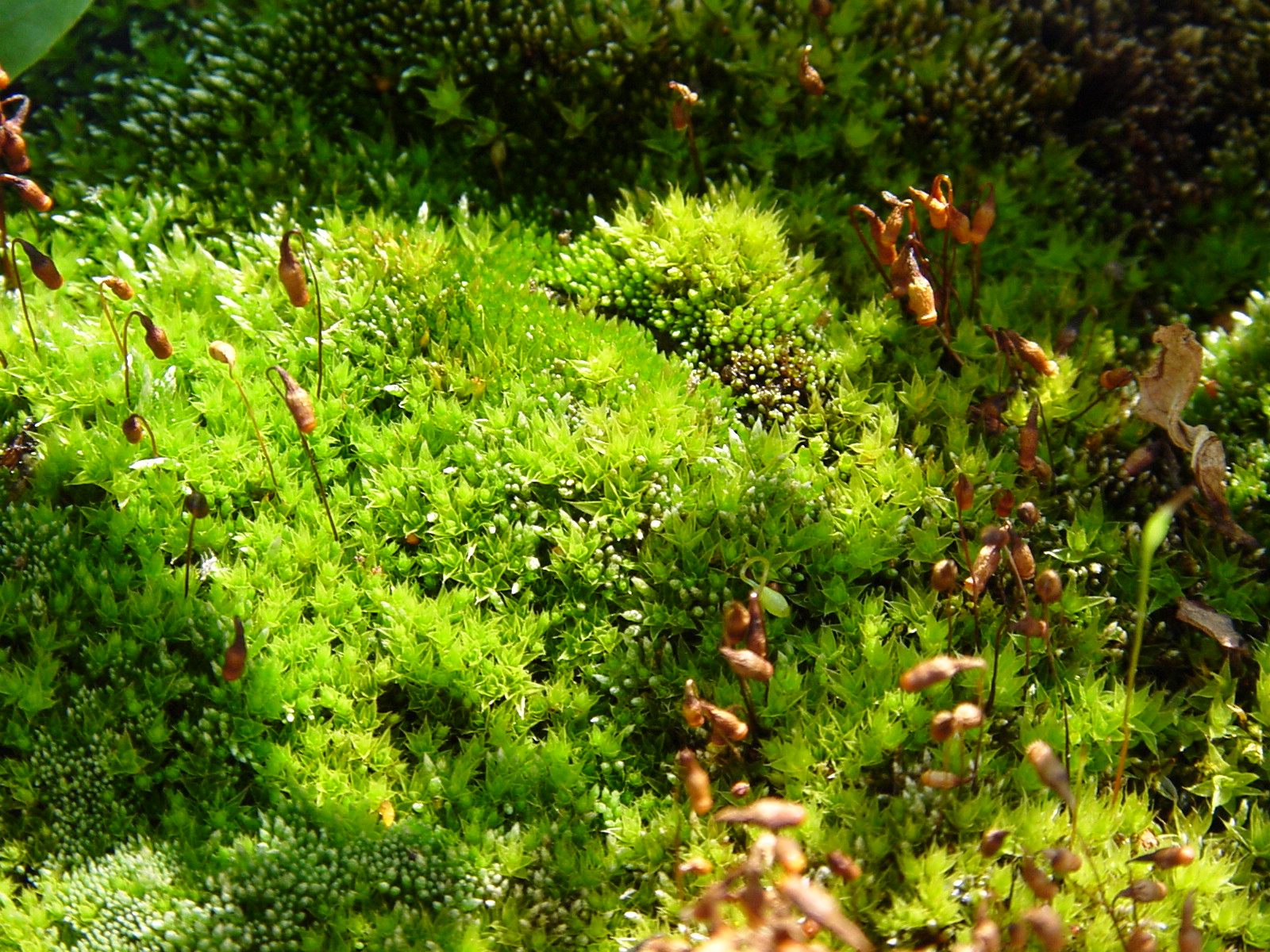 Being a nature lover at this time of year is wonderful. There’s so much growing and chirping that it’s impossible not to engage with it. But there’s almost more joy in being a nature lover in the autumn and winter, when you can spot the things that others don’t see. Secret hordes of mosses and lichens on walls and trees are treasure troves of wonder in a wintry landscape. I adore the summer flowers and baby blue tits (no, really, I really do!), but my biggest sense of wonder comes from uncovering the joy in the things others pass by. The bryophytes’ secret wonder is my favourite kind. 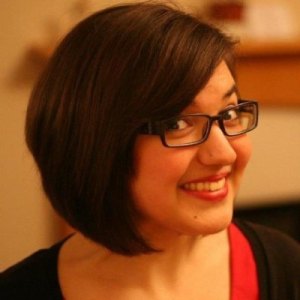 Emily Sturgess is the Development Officer for Christians in Science. She studied Biological Sciences at Jesus College, Oxford, and then went on to obtain an MSc in Species Identification and Survey Skills from the University of Reading, as training in environmental consultancy. She is particularly interested in biodiversity, conservational ethics, animal behaviour and making spreadsheets. In her spare hours not being a Development Officer, she blogs, eats cake, and occasionally plays in a ceilidh band.