For as long as I can remember I have enjoyed finding out how things worked and exploring the world of nature. An avid reader of science books even at primary school, I rapidly progressed to experimenting with my chemistry set in the cellar of my parents’ house and even made my own fireworks!  As I went on to study science for my A levels and then at University, I never felt a conflict between the world of science and my Christian faith; rather I found my wonder of God as creator increasing the more my scientific studies revealed.

I was fortunate enough to be part of a church fellowship that supported and encouraged me in my developing scientific career and enabled me to flourish both as a Christian and as a scientist. But not all Christian scientists have been so fortunate, and I have known several lose their faith because living as a Christian in the scientific workplace can be tough.  Others have found it hard to admit to their colleagues that they are a follower of Jesus.  My reason for writing this blog is not to pass judgement but to explore the reasons for this. I will stress the importance of the support and encouragement of the church in helping Christian scientists be open about their faith in the workplace and suggest some practical advice gleaned from my own experience.

Making yourself known as a Christian can be especially difficult for scientists, since many colleagues have accepted a conflict narrative of the relationship between science and God, which is exemplified by the likes of Richard Dawkins and so loved by the media. They wrongly conclude that a “proper” scientist cannot believe in God, and sometimes this produces outright hostility towards religion and ridicule of those who hold a sincere faith. For a Christian stepping into this world as a new and aspiring scientist, this presents a daunting challenge and may prevent them from admitting to their faith for fear it will damage their reputation as a scientist. Indeed, during my academic career I have discovered senior colleagues who remain “closet Christians”, their faith being a private matter and not something to be displayed openly in the workplace.  Here are a few a few personal observations that may help a Christian starting out in the scientific workplace to bring their faith out into the open.

My first advice would be that it is vital to be both a good scientist and a caring, honest and trusted colleague who speaks and acts with integrity.  First, give it time for your colleagues to find out that you are excited and fascinated by your own science and that of your colleagues. Second, they need to know that you are not trying to ‘covert them’, but that you have a genuine interest in their lives and take part in those discussions over coffee or in the pub that range from science to politics to sport.

I remember in my first days as a PhD student making an embarrassing mess of speaking openly about my faith! After a fruitless year or so, I realised that I needed to relax, pray and let God do the spade work.  So, I focussed more on just being a good scientist and colleague and mentioning my faith when it came up naturally.  I then found that people started asking me questions about Christianity or entering into discussions; and from there came the opportunities to speak about my faith in a natural way. Of course, some colleagues will be dismissive or just ignore you, but it is surprising how many are interested in hearing more if you have gained their respect.

On one occasion, my Research Assistant said to me in the middle of an experiment “You are a Christian aren’t you – why?”.  We agreed that perhaps a conversation on this topic was better postponed until we could relax over coffee after the experiment was finished!  Another time I discovered that one of the PhD students had gone to a school where our curate taught, so I mentioned this, and he decided to come along to a church service to hear him.  He ended up going along to a Christian Basics group, becoming a Christian and meeting his wife! Over the years quite a few of my colleagues have come to church events such as Carol Services (always a good bet), and a few went on to explore the Christian faith further.

Another thing that I have become aware of is how helpful it is for Christians entering a new scientific workplace  to know who the other Christians are who are working in the same department or company.  Even better is the opportunity to meet up occasionally to support one another.  A more established Christian member of staff may be best placed to enable this to happen, perhaps by offering to set up a group, if one does not already exist.  If it is allowed this can be achieved by sending out an email telling all  in the department, faculty or company or using a notice board. When I did this, I discovered some other quite senior members of my faculty who were Christians whom I didn’t know about! That helped me to realize that even well-established Christian scientists can find it difficult to be open about their faith with their colleagues, and the longer they their faith remains hidden the harder speaking openly about it becomes.

I think perhaps that some people might find it easier in the first instance to speak about science and faith outside of the work place, may be in a church or youth group setting. Doing this may increase their confidence in being more open about their faith in future conversations with colleagues.  Such speaking opportunities are equally important for younger Christian scientists. I remember benefiting greatly as a PhD student and post-doc having the opportunity to talk to church youth groups and student groups before graduating to speak at larger church gatherings. Christians in Science can help support Christian scientists in this regard, and also offers mentoring for recent graduates as they step out into the working world of science with all its challenges. Indeed, for many Christians in the sciences, CiS has been a lifeline in encouraging them to live as a Christian in the world of science, which brings me to my last point:  a plea for church leaders to consider how welcoming their fellowships are for scientists.

Sadly, some churches are not very “science friendly”. Rather than rejoicing in the new and wonderful knowledge of the “works of the Lord” that science brings, there can be a pervading suspicion of science and scientists, and especially those who accept evolution.  If both the church and the workplace seem somewhat hostile places for a young Christian starting out on his or her scientific career it should be little surprise that they find admitting to their faith at work a tough challenge.  If churches are to become more welcoming and supportive of scientists we must find ways of building bridges and explaining how mainstream science need not conflict with accepting the authority of scripture. We must become more effective at promoting the view that science and faith can enrich one another; they are friends and not foes. When churches begin to recognise this, they will become more welcoming to the scientists in their midst and better able to encourage and support them in being open about their faith in the workplace. 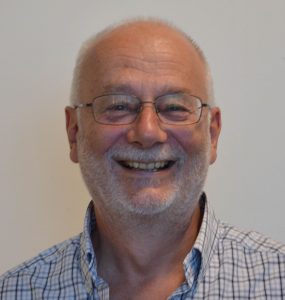 Andrew Halestrap is a Trustee and Committee chair of Christians in Science. He is Emeritus Professor of Biochemistry and Senior Research Fellow at Bristol University. He has published more than 200 original research papers, is a Fellow of the Academy of Medical Sciences and was awarded Keilin Memorial Lecture of the Biochemical society in 2010. He has served in various leadership roles in his church and academia including being a past Chair of both the British Heart Foundation Project Grants Committee and the Bristol Heart Institute. His research interests include how lactic acid crosses cell membranes and the role of mitochondria in the healthy and diseased heart.